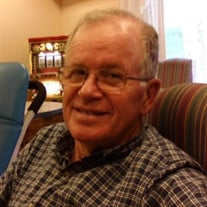 Steven Arnold Bleier, age 75, died peacefully in his sleep, Saturday March 20, 2021 in Mason, Ohio. Born and raised in the Canarsie neighborhood of Brooklyn, New York, Steven was a loyal fan of the Brooklyn Dodgers and later the New York Mets. He loved history and was a railroad and model railroad enthusiast, particularly the upstate New York and Pennsylvania Erie Lackawanna Line. Additionally, Steven loved animals including birds, cats and his beloved miniature donkeys, Cisco and Mac. Steven was an avid scholar and possessed a diverse undergraduate and graduate Liberal Art and Science education with an emphasis on advanced Science and Mathematics. His masters’ thesis was published by the US Army. In later years, Steven pursued a graduate education in classical and modern Jewish texts including original Biblical Hebrew. He earned a Bachelor of Science degree from City College of New York in 1968, a Master of Science Degree from Monmouth College in 1975 and a Master of Arts in Jewish Studies from Hebrew College in 2007. Steven was a member of Sigma Pi Sigma National Physics Honor Society and received the Clara M. Silbert Memorial Prize for Excellence in Bible Studies from Hebrew College in 2007. Steven worked for the US Army Communications Electronics Command (CECOM) in Fort Monmouth, New Jersey for 33 years before retiring in 2001 as a GS-14-0855 Electronic Engineer. Additionally, Steven was highly active in his local synagogue and held multiple roles and positions at Congregation Beth Israel, Honesdale, PA including Treasurer and was a Member of the Board of Trustees from 2006 to 2010. After moving to Cincinnati in 2018, Steven attended Northern Hills Synagogue in Warren County. Additionally, Steven was very active in the United Methodist Church along with his wife Susan, advocating for interfaith marriage and dialogue while also serving as the safe sanctuary representative for the Bethany UMC in Honesdale, PA. Preceded in death by his parents Martin and Sylvia and his brother Leonard, Steven is survived by his wife of 34 years, Susan; his brother Larry Bleier of Binghamton, NY; his daughter Jennifer Carter of Louisa, VA; a step-son David Clark of Cincinnati, Ohio; four grandchildren and numerous cousins, nieces and nephews. Private services held at the convenience of the family. Service Recording: https://us02web.zoom.us/rec/share/DBYiV_i0RA9rP0x-Cm2YfvSCT4vH7WEvjyMQeVIcGKTJUcqygkGSCvnKVmYxYp0G.HNJ1Zc8PasthYrh6

The family of Steven Arnold Bleier created this Life Tributes page to make it easy to share your memories.