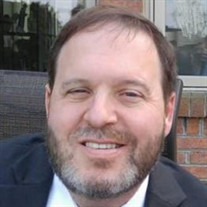 Stephen Todd Berger passed away peacefully on April 27, 2021 in Cincinnati, Ohio at the age of 55. He is survived by his beloved wife, Linda (nee Lakeman), loving sons, Adam and Ethan, mother, Marsha, sister, Elisa (Jeff) Knudsen, and several close family and friends. He was preceded in death by his father, William Berger. Stephen was born in Providence, Rhode Island. He moved to the Cincinnati area in 1991, and began his career in information technology. He was a partner of Premier Network Solutions, a local IT company, for over fifteen years. He continued his IT career at Without a Doubt Truck Repair. As an avid science fiction fan, Stephen was a member and officer of the USS Yorktown, a local Star Trek organization, where he met his wife in 1993. He was a dedicated volunteer and community leader for Congregation Etz Chaim. Often returning to Rhode Island, he visited his extended family and enjoyed Del’s Frozen Lemonade, NY System Hot Wieners, and Narragansett Beach. Stephen had the biggest heart and would be the first to help anyone and everyone he knew. He was a loving husband, father, son, brother, uncle and cousin who adored his family above everything else. Private graveside services will be held on Friday, April 30. In lieu of flowers, memorial contributions may be made in his memory to Congregation Etz Chaim, 8100 Cornell Road, Cincinnati, Ohio 45249. Service Recording https://us02web.zoom.us/rec/share/boZJ-TvTJEzYY8NC7fzrGR35QBrGuOB6yLSwf_EoJ3QiRXkqQ4xTDavd1WRQXbI.lY_VknbQYyU8BHPY

The family of Stephen Todd Berger created this Life Tributes page to make it easy to share your memories.