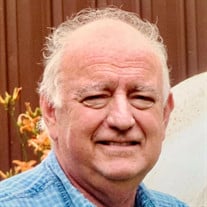 Stanley Engelhardt, M.D., 77, formerly of West Bloomfield, Michigan, died on April 7, 2021. The funeral will be a private graveside family service held in Cincinnati, Ohio, and streamed to all of those who wish to remember him. Stan was born on February 6, 1944, in New York to Justin and Martha Engelhardt, both survivors of the Holocaust. As a child, the Engelhardts settled in Cincinnati, where Stan grew up in very humble circumstances. Stan's parents instilled in him a strong work ethic and dedication to serving his community which lasted throughout his life. In turn, Stan passed these principles on to his own children. Stan attended the University of Cincinnati as an undergraduate, and was accepted to both medical and veterinary school. At his mother's urging, he attended medical school at the University of Cincinnati, where he was a member of the Alpha Epsilon Pi Jewish fraternity. Initially interested in practicing obstetrics, Stan found little demand for that specialty when drafted into the U.S. Army. Instead, he pursued a career in Emergency Medicine. Stan served his country until his honorable discharge, achieving the rank of Captain. After the military, Stan eschewed the lure of private practice, and embraced the fast pace of emergency medicine for decades. He proudly earned the Exemplary Service Award in recognition of his time, intellect, and talent that enhanced the values, mission, and quality of services at St. Joseph Mercy hospital, where he practiced for decades. Passionate about providing patients with the finest care, Stan worked through the day of a stroke in 2017 which begrudgingly forced his retirement. Stan loved to be around animals of all types and sizes, and had a particular affinity for horses. His love of horses, when combined with his deeply instilled sense of giving back to his community, led him to serve as a mounted deputy sheriff with the Macomb County and Oakland County Sheriff's Departments. While Stan was passionate about many things, his two main loves were animals and Costco trips. He was devoted to his many pets, and would spare no expense to spoil them. He likewise loved all things automotive, however big or small, aspiring to have a car for every day of the week. An avid traveler, Stan saw the world. Stan is honored and survived by his children, James (Laura) Engelhardt, Seth (Nancy) Engelhardt, Chad (Jennifer) Engelhardt, and Nicole (John) Becker. He is further survived by several grandchildren. Stan was preceded in death by Beverly Nathan Engelhardt, beloved mother of his children. It is suggested that those who wish to further honor the memory of Stan Engelhardt may do so by making a contribution to: Jewish Family Services of Washtenaw County 2245 S. State St., Ste 200 Ann Arbor, MI 48104 (734)769-0209 https://jfsannarbor.org/support/donate-online/ Or: Humane Society of Huron Valley 3100 Cherry Hill Road Ann Arbor, MI 48105 (734) 662-5585 https://www.hshv.org/give/donate/ The family asks that the next time you go to Costco, you think of Stan. Service Recording: https://us02web.zoom.us/rec/share/Ejv0X9h9Nu6KQHgUdmCnI9bc0w8poJaTOhe26uxtxlN0KI5RC_DFwHscOjfjkgLE.oAVVBNhybZZlvTdh

Stanley Engelhardt, M.D., 77, formerly of West Bloomfield, Michigan, died on April 7, 2021. The funeral will be a private graveside family service held in Cincinnati, Ohio, and streamed to all of those who wish to remember him. Stan was born... View Obituary & Service Information

The family of Stanley Lester Engelhardt created this Life Tributes page to make it easy to share your memories.