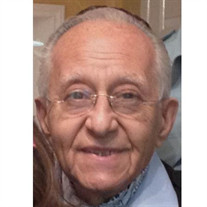 Dr. Simon Hakim passed away on March 24, 2021 at the age of 91. Dr. Hakim completed his medical degree at the Jesuit University in Beirut Lebanon and started practicing medicine in Montreal, Quebec at the Jewish General Hospital. After receiving a sponsorship to draw immigrant physicians to the United States in the early 1960's, he moved to Cincinnati and started at the Jewish Hospital. In 1969, he was hired as faculty of Anatomic Pathology at the Veteran Affairs Medical Center (VAMC) on Vine Street in Clifton, Ohio and held a joint appointment in the Department of Pathology and Laboratory Medicine of the University of Cincinnati College of Medicine. During his career, Dr. Hakim was responsible for teaching pathology residents of University Hospital and medical students at the University of Cincinnati College of Medicine. A great pride of his life was seeing both of his children attend and graduate from the University of Cincinnati College of Medicine in 1997 and 1998. Dr. Hakim retired from the VAMC at the age of 70 in 1999 after 30 years of service. Dr. Hakim was a loyal family man and the oldest of seven children, born in Beirut, Lebanon to Zacki and Marie Hakim on November 24, 1929. As he left his family to pursue his studies, he remained actively involved in their lives despite living on a different continent from his siblings who resided in Brussels, Israel, Lebanon and Montreal. He could be relied upon steadily to represent the Hakim name as he attended family functions all over the world for brit milahs, Bar Mitzvahs, weddings and funerals. He felt a great source of pride and dignity to be there for his entire extended family over their lifetimes. Dr. Hakim was a charming, pious, worldly and profoundly intelligent man who was dedicated to Judaism. He was known for his dapper outfits, bowties and three piece suits while attending shul or social functions. He loved to connect with people (especially children) at the synagogue, the JCC, or around Cincinnati and would make them feel important by remembering details about their family or where they were in life. Fluent in three other languages besides English, he would get a huge smile when coming across someone who spoke Arabic, French or Hebrew and would automatically switch into that language whether at the grocery store, shul or traveling. His love of learning was paramount and evident throughout his life as he taught pathology residents at the VAMC and during his dedication to Jewish studies. He was especially known for asking questions to stimulate thought: to his many students over the years in medicine, to his teachers at the Cincinnati Community Kollel, and to friends and family over a seder or holiday meal. Dr. Hakim was dedicated to the Jewish Community of Cincinnati since his arrival in the mid 1960's. He was steadfast in his desire to instill his love and dedication to Judaism in his children, Jonathan and Mimi. A member of Adath Israel Synagogue since 1968, Dr. Hakim made sure that his family were regulars for Shabbat and holiday services. In 1991 Dr. Hakim became a member of the Golf Manor Synagogue and his steadfast presence was observed for many years during the shabbat as well as holidays and minyans. Dr. Hakim felt deeply enriched by the learning and studying of Torah and became a daily participant at the Cincinnati Community Kollel in Golf Manor. After his retirement in 1999, Dr. Hakim tutored children in Hebrew at the Rockwern Academy (his own children’s alma mater) to continue his love of learning, teaching and interaction with youth. Dr. Hakim was a well recognized member of the JCC at its original location on Summit Road in Roselawn swimming and exercising at the outdoor pool and indoor facilities, and when it moved to Ridge Road he was there daily, lifting weights, running and swimming up until the closure due to the pandemic. Although transplanted to the United States from his native Lebanon, Dr. Hakim became a member of the United States Army Reserves, working his way up to the rank of Colonel at the time of his retirement. He was cognizant of and very grateful to the United States for the many opportunities that this country gave him and his family. Although he traveled avidly to visit family and attend medical conferences, he remained steadfast and loyal to his home in Amberley Village. Dr. Simon Hakim’s gentle and strong demeanour will be sorely missed by many that he touched and cared for in his many years especially as a parent, but also as a mentor and upstanding member of the Jewish community. He was predeceased by his parents Zacki and Marie (Shattah) Hakim and his brothers David, Solly (May Hara) and Moussy Hakim. He is survived by his devoted children Dr. Jonathan (Eniko Balassa) Hakim, and Dr. Mimi (Dr. Joel Turner) Hakim; his sisters and brothers-in-law Olga and the late Badiah), Shela and Maurice, Ivette and Georges, his sisters-in-law Diana Gattegno and Monique, grandchildren Sasha and Maya Turner, Simon, Lior and Lilah Hakim. He is also survived by his many loving nieces, nephews and other relatives in Belgium, Israel, Lebanon and Montreal. A private funeral was held at the Montgomery United Jewish Cemetery in Montgomery, Ohio on March 24th. Memorial contributions can be made in Dr. Simon Hakim’s name to the Senior Center at the Mayerson Jewish Community Center of Cincinnati, Golf Manor Synagogue of Cincinnati, Ohio or to the Cincinnati Community Kollel.

Dr. Simon Hakim passed away on March 24, 2021 at the age of 91. Dr. Hakim completed his medical degree at the Jesuit University in Beirut Lebanon and started practicing medicine in Montreal, Quebec at the Jewish General Hospital. After receiving... View Obituary & Service Information

The family of Dr. Simon Hakim created this Life Tributes page to make it easy to share your memories.