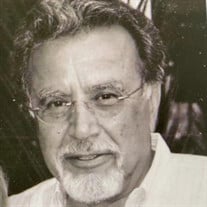 SIDNEY GOLDSTEIN CINCINNATI - Dr. Sidney Goldstein passed away in his sleep peacefully and calmly just as he lived his life, on January 26, 2022. beloved husband of the late Janice Goldstein, devoted father of Rhonda Sheakley (Larry), David Goldstein, and Nina Meranus-Harris (David Harris). dear brother of Bernard Goldstein, loving grandfather of Jacquelyn Lankford (Frank), Jarrod Byer (Carly), Johanna Byer-Adcock (James), Grant Meranus and Kyle Meranus, great grandfather of Coulter, Griffin, Sam, and MacLaine Lankford, Halston, Simone and Gemma Byer and Bowes Adcock. Sidney Goldstein was a gentle giant. Quiet, reseved, thoughful, supportive, loyal and handsome, with a wonderful sense of Humor. Sid, was called " Poppie" by his grandchildren and 15 great grandchildren, of which he was totally devoted. He was also known as "Saint Sid " to all of his friends . His best friend, and wife Janice, "Gigi" of 65 years, passed away in May. Together their passion was travel, and collecting art and antiques. They loved music, ballet and opera, fine foods and wines. Sid was proud of his big arm muscles , commonly referred to as his " Guns" . Sid could be seen walking along the river ,playing tennis with friends , and pumping iron at the JCC. Dr Sidney Goldstein was An American Pharmaceutical scientist. He received his pharmaceutical education at the Philadelphia College of Pharmacy and Sciences, where he was granted the Bachelor, Master and Doctorate degrees. Dr. Sidney Goldstein , was advisor to the Chairman, Scientific Affairs at PRASCO. He had over 50 years experience in the pharmaceutical industry and is the author of more than 50 publications and presentations. Previously he was Chief Scientific officer at PRASCO, LLC., Vice President of Business Development, Science and Technology at Duramed Pharmaceuticals, Inc. and Vice President and Director of Global Pharmaceutical and Analytical Sciences at Marion Merrell Dow. Dr. Goldstein was a memeber of University of Cincinnati College of Pharmacy Dean's Advisory Council, the UC President leadership committee for the College of Pharmacy, and the UC Foundation Development Council. He was also on the Cincinnati Children's Hospital Technology Validation Advisory Board and a member of the Generic Pharmaceutical Association Technical Committee. Dr. Goldstein is listed in Who's Who in America, Who's Who in Medicine and Healthcare, Who's Who in the Midwest, and Who's Who in Science and Engineering. Dr. Goldstein, is one of the recipients of the R&D Magazine 100 award for the development of the Nicoderm patch, the Dow Chemical Future Awards for the development of Seldane D and the Nicoderm patch. In addition, he has been involved in the development of over fifteen marketed drug products, which has changed the lives if so many. His peaceful disposition and the sparkle in his eyes, will be missed by those who knew And loved him. The family is having a private graveside service. In lieu of flowers please make donations to: The Christ Hospital Foundation-Lindner Research Fund, Attn: Rick Kammerer 2123 Auburn Avenue Suite 528 Cincinnati, Ohio 45219 or The University of Cincinnati Foundation college of Pharmacy PO Box : 19970 Cincinnati, Ohio 45219.

The family of Sidney Goldstein created this Life Tributes page to make it easy to share your memories.