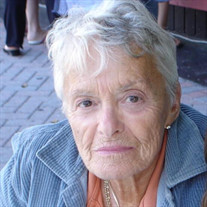 SHIRLEY KANTOR BEHR CINCINNATI- Behr, Shirley Kantor, passed away December 20, 2020. Shirley was born and raised in the South Shore neighborhood of Chicago, the beloved daughter of Jacob and Rachel Jacobson, z”l. She felt great pride in having graduated from the University of Louisville, where she earned a Bachelor of Arts degree. After college she married Dr. James Orkin Smith, z”l, living in Paris, France for six years while their children were young. She eventually settled in Maine to continue raising her family, where she also worked as a teacher and eventually in real estate and sales. Shirley was a dedicated mother to her three boys, an active member of every community in which she lived, and a loyal friend to the many people she knew. She was the proprietor of Bath House Antiques, where she used her keen eye for beauty to acquire and sell many exquisite pieces of antique furniture and collectibles, keeping more than a few of these fine objects to fill her own homes over the years. She later married Paul Kantor, z”l, forming a joyous and loving bond that would eventually bring her from Florida to the Cincinnati area. Following the death of her second husband she met and married Herbert Behr, who became her devoted and caring spouse for over 22 years. Her interest in art, culture, and adventure took her around the world to dozens of countries and to all parts of the United States during her lifetime of travels. For years Shirley was socially active, volunteering at her synagogue and radiating joy and love wherever she went. Preceded in death by her older brother, Irwin Jacobson (Frances), she is survived by her husband, Herbert Behr; her younger brother, Stanley Jacobson (Avis); her three sons, Gordon Smith, Andrew Smith (Lavea), and Delling Zing (Andrea); two nephews, Mark Jacobson and Arthur Jacobson (Robin); and four grandchildren, Ezer Smith, Eliya Smith, Zohar Zing, and Zara Zing. Private Burial. Donations in her memory may be made to the Wise Temple Library Fund or to the Jewish Federation of Cincinnati for Holocaust Education. A shiva will be held on Saturday, December 26, 2020 at 7 pm Join Zoom Meeting https://us02web.zoom.us/j/82339545693?pwd=dzA2MFh0bHZ4dE9QNzNzVi95bHlsUT09 Meeting ID: 823 3954 5693 Passcode: 757864 Service Recording: https://us02web.zoom.us/rec/share/DdApRPeMIULiNz_-zAbmkICSNUVfqUj2EGsrKy4aBG5_Ze-f9XZmyF0OgleCnp-C.dTOvZnYdx1HhE1pK Service Recording: https://us02web.zoom.us/rec/share/CUaGUKnh5nPFR3ju8dvNmLDlxpf7S1F081tahgAD-VJZvrrmtAK2uabpNx5ra6Te.k9-MMQotethVeojR

The family of Shirley Kantor Behr created this Life Tributes page to make it easy to share your memories.