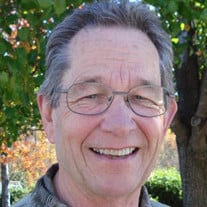 Samuel Briggs Ashford, age 88, passed away on January 3, 2021 in Cincinnati, Ohio. Sam was born in Scotland Neck, NC to John Durwood Ashford, Sr. and Virginia Mitchell Ashford. He was preceded in death by his parents, his brother John D. Ashford, Jr, and ex-wife Frances S. Ashford. Sam is survived by his wife of of 23 years Janet Ashford, his daughters Kathryn Atack (Jim), Laura Ashford, Heather Garrabrant (Ed); ; stepchildren Bob Nesbit, Martha Colaner (Tom), Kate Elledge (Clyde), Jim Nesbit (Beth), and Susan Nesbit (Jerry McGeorge). Combined, Sam and Janet had 20 grandchildren, and three great grandchildren at the time of Sam's death. He considered all of the kids his grandchildren and great grandchildren and loved spending time with all of them. Surviving grandchildren are Christopher and Brian Atack, Jacqueline and Tess Ashford, Caitlin Garrabrant Gile (Luke) and Will Garrabrant; Sam, Eleanor, George and Maddie Nesbit; Katie Wolf (Joe), Erin Schmidt (Kevin), and Regan Colaner; Charlie and Mary Rose Elledge; Ben and Griffin Nesbit; Max, Kili, and Finley McGeorge; and great grandchildren Kylah Donley, and Eleanor and Tommy Schmidt. Sam's younger brother David Ashford of Tennessee also survives him, as well as beloved sisters-in-law and nephews and niece. Sam grew up in Scotland Neck, NC. He attended UNC for one year then joined the US Air Force as a pilot. He graduated from the NCSU School of Design in 1964 and worked for Carter Williams, DMJM in Washington DC, then in partnership with Truman Newberry in Raleigh, NC. In 1980 Sam entered into solo practice as Ashford Architecture, of Raleigh and Pittsboro, NC until he retired in 2011. At that time Sam and Janet moved to Prospect Heights, Illinois where they enjoyed the proximity to family and the city of Chicago. Sam opened Ashford Gallery in Arlington Heights, Illinois, where he continued painting and participating in the local arts community. In the summer of 2018 Sam and Janet moved to Cincinnati, Ohio to be closer to family. At this time there are no plans for a public service.

Samuel Briggs Ashford, age 88, passed away on January 3, 2021 in Cincinnati, Ohio. Sam was born in Scotland Neck, NC to John Durwood Ashford, Sr. and Virginia Mitchell Ashford. He was preceded in death by his parents, his brother John D.... View Obituary & Service Information

The family of Samuel Ashford created this Life Tributes page to make it easy to share your memories.