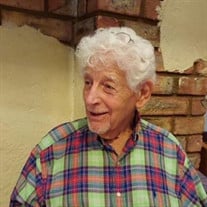 RONALD ROSE CINCINNATI- Ronald Rose, age 91, passed away after a brief illness on January 27, 2022. He was born in Cleveland, Ohio on October 10, 1930. In 1946, he moved to Sidney, Ohio with his family: Helen Zoss Rose and Max Rose, his parents, and his sister, Betty Harris, Mrs. Irwin, all now deceased. He graduated from Sidney High School in 1948, having played varsity football. He received a BA from Bowling Green State University in 1952 where he was president of ZBT and played the saxaphone professionally in local and Toledo clubs. He enlisted into the army and served in Korea, being honorably discharged in 1954. He then moved to Cincinnati and taught art at Western Hills High School. He became certified to sell life insurance as a summer job and quickly experienced success soon and transitioned to working as a full time general agent. He qualified as a Chartered Life Underwriter and was a lifetime member of the Million Dollar Round Table. He served as president of the Jewish Center and was a member of the Board of Rockdale Temple. He had three children with his first wife Janet Toby; Julie, Sally (David Hansen) and Andrew Zoss Rose. He was married to his second wife Lee Viers Rose until her death in 2012, and loved his stepchildren Brett Viers and Rhonda Viers Swadner as his own. He has 3 beloved grandchildren, Maddy Rose Weisman, and Zachary and Lindsey Swadner. After the loss of his second wife, Ron had a loving companionship with Nancy Christy, a family friend for decades, until her death in 2020. Ron was predeceased by his beloved son Andrew Zoss Rose, second wife Lee Viers Rose, his sister Betty Harris, and parents Max and Helen Rose. He remained active at the Jewish Community Center, playing softball on its team until age 85 when he transitioned to coaching, which he had signed up to do again this year before becoming ill. He taught painting and drawing classes over the years at the Jewish Center, most recently last fall. He was a talented painter, and especially enjoyed working with watercolors. Ron was beloved in the community and will be missed by his many friends and extended family members. He will be remembered fondly by all for his endless enthusiasm and love of life. The family will have a Private Service Monday, January 31, 11:00 A.M. at the Weil Kahn Funeral Home. The service will be LIVE STREAMED at https://webcast.funeralvue.com/events/embed_viewer/68175. Burial to follow at the United Jewish Cemetery in Montgomery, Ohio. In lieu of flowers, memorial contributions to the Mayerson JCC Softball League.

RONALD ROSE CINCINNATI- Ronald Rose, age 91, passed away after a brief illness on January 27, 2022. He was born in Cleveland, Ohio on October 10, 1930. In 1946, he moved to Sidney, Ohio with his family: Helen Zoss Rose and Max Rose, his... View Obituary & Service Information

The family of Ronald Rose created this Life Tributes page to make it easy to share your memories.