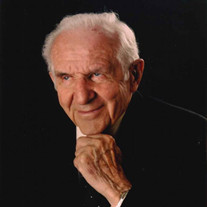 Robert Louis Lappin passed away at the age of 98. He was born in Shaker Heights, Ohio on March 30, 1923 to Rose and Max Lappin. He attended Shaker Heights schools until the age of 15. He took great pleasure in the Boy Scouts where he became an Eagle Scout. When they moved to Cincinnati, Bob graduated from Walnut Hills High School. While in Cleveland, at 10 years old, he took up playing trumpet. He became a very serious musician and formed his own band called “The Blue Rhythm Orchestra”. He was in the Walnut Hills’ High School orchestra and was a drum major at Walnut Hills High School. Bob was in the U.S. Air Corp band during World War II and became the conductor, with Tony Martin as his vocalist. Following the war, he returned to the University of Cincinnati where he earned a degree in business administration and attended the Conservatory of Music. He was the president of Sigma Alpha Mu fraternity for several years. Bob formed his own business, “Lappin Sales”. Both his sons, Gary and Randy, joined him in the business. His grandson, Spencer, continues in the business as the fourth generation. While in Cincinnati, he served on the board at Wise Temple for 6 years. Bob co-chaired fundraising with his wife, Phyllis, for 2 years for Hospice of Cincinnati. He was very supportive of the founding of Cedar Village. Bob also lived in Boca Raton, Florida for 40 years where he became very active being the president of his community for 16 years. He was also president of the Council of Presidents of the Polo Club where he founded the United Jewish Appeal and was co-chair for 5 years. Bob loved life, his friends, and family. In 1947, he married Phyllis Berg. They have three children, Bonnie (Rob), Gary (Lynn), and Randy (Libby) and seven grandchildren, Geneva (Steve) Stein, Spencer Lappin, Megan Lappin, Charles Lappin, Max Lappin, Ben Onore and Michael Onore. He has two great grandchildren, Alexandra and Anderson Stein; and nieces and nephews. His sister, Ruth Shaul, is deceased. In his leisure time, he pursued his passions for golf, tennis and playing cards with his many friends. He felt he left this world a better place for being here and his family and friends agree with this. He lived by the philosophy that you should give as well as take from the world. He always told those he loved to tell the people they loved how much they loved them every day. He was very happy and appreciative to be able to share a very special marriage for 73 years with Phyllis. To Quote Bob: “Get Hold of the person you love sitting next to you and tell them you love them and do it every living day. Get hold of yourself and stop complaining – enjoy life while you have it – every single day and night”. Memorials may be made to Hospice of Cincinnati or the charity of your choice. Funeral services will be held Friday, July 2, 2021, 1:00 PM at Weil Kahn Funeral Home 8350 Cornell Road, Cincinnati, OH 45249 with a visitation at 12:00 Noon, burial to follow at United Jewish Cemetery Montgomery 7885 Ivygate Lane, Montgomery, OH 45242. Service Recording: https://us02web.zoom.us/rec/share/YI3h--JBt1mH1ldJxG94k2cmxf8uY0LsFzxViGyKRglKL-Pk-W6WASYHye_6-yfN.JH-6bZ4Y53kO-WoE

Robert Louis Lappin passed away at the age of 98. He was born in Shaker Heights, Ohio on March 30, 1923 to Rose and Max Lappin. He attended Shaker Heights schools until the age of 15. He took great pleasure in the Boy Scouts where he became... View Obituary & Service Information

The family of Robert Louis Lappin created this Life Tributes page to make it easy to share your memories.

Robert Louis Lappin passed away at the age of 98. He was born...