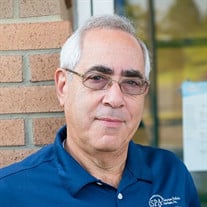 Dr. Richard B. Heyman, 66, of Cincinnati, OH and Hilton Head Island, S.C., passed away August 13, 2014 at Hospice of Cincinnati –East after a brief illness. He is survived by his wife Beth (nee Martin) of 42 years and three sons (and daughters-in-law): Alex (Ashley) of Del Rio, TX, David (Ronda) of Cincinnati, OH, and Neil (Ashley) of Chicago, IL. He leaves eight beloved grandchildren: Taylor, Emma, Eli, Leah, Jonah, David, Libby, and Ellie. Richard is also survived by his brothers Skip Heyman of Virginia Beach, VA, David (Grace) Martin of Chicago, IL , Peter (Jean) Martin of Seattle, WA, and Eric (Hiromi) Martin of Tokyo, Japan, many nieces and nephews, and cherished friends and colleagues. Dr. Heyman was born in Plainfield, NJ to Norma and Jim Heyman. After graduation from the Columbia University College of Medicine, he practiced pediatric medicine with Suburban Pediatric Associates for 36 years in Cincinnati, OH, with a special interest in adolescent substance abuse. After retiring to Hilton Head Island in 2011, he continued his Cincinnati practice part-time and volunteered at Hilton Head’s Volunteers in Medicine Clinic until the time of his illness. Dr. Heyman served the American Academy of Pediatrics at the local, state and national levels as president of the Cincinnati Pediatric Society, chair of the Committee on Adolescence and Sports Medicine within the Ohio Chapter, chair of the national Committee on Substance Abuse 1994-1998, and chair of the Executive Committee of the Section on Adolescent Health (SOAH) from 2003-2007. He received the Adele Dellenbaugh Hofmann Award from SOAH in 2011, recognizing excellence in the field of adolescent health. The Founders Award for Adolescent Health, awarded annually to an individual who has made significant contributions to the community to improve the care for teenagers and to educate pediatricians about the health care needs of adolescents, is being renamed the Richard B. Heyman Award in recognition of his passion for helping substance abusing teens. Richard’s interests and activities beyond his family and profession included swimming in the ocean, biking, golf, opera and classical music. He served on the Board of Directors and Executive Committee of the Hilton Head Symphony Orchestra (HHSO), which shares its Maestro John Morris Russell with the Cincinnati Pops Orchestra. The HHSO will dedicate its November 16 and 17 concert of Beethoven’s Fifth Symphony to Richard’s friendship and service. A Celebration of Life reception will be held on Hilton Head Island at 1:00 pm, November 16, at the Port Royal Plantation Beach House. Dr. Heyman will be remembered as an exceptionally caring and competent professional and a wonderful family man and friend with high energy, a vibrant personality and unmatched wit. He has left his indelible mark on all who knew and loved him. A memorial service will be held in Cincinnati on Sunday, August 17 at 10:00AM at Weil Funeral Home, 8350 Cornell Road. Visitation at the funeral home on Sunday begins at 9:00AM. In lieu of flowers, the family suggests contributions be made to Hospice of Cincinnati, 7691 Five Mile Rd., Cincinnati, OH, 45230 or, in order to recognize excellence and compassion in hospice nursing, the DAISY Foundation at daisyfoundation.org.

Dr. Richard B. Heyman, 66, of Cincinnati, OH and Hilton Head Island, S.C., passed away August 13, 2014 at Hospice of Cincinnati &#8211;East after a brief illness. He is survived by his wife Beth (nee Martin) of 42 years and three sons (and... View Obituary & Service Information

The family of Dr. Richard B. Heyman created this Life Tributes page to make it easy to share your memories.