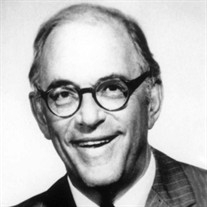 March 22, 2021 - Paul Henry “Pete” Tobias peacefully passed away due to complications from Alzheimer’s, his beloved wife, Phyllis, by his side. Pete was born in Cincinnati, OH on January 5, 1930 to Charles Henry Tobias and Charlotte Westheimer Tobias. He was a man who had a lust for life, who never met a stranger, and was always curious about new places, new people and new adventures. There were so many people who say that through his kind words and deeds, he made a difference in their lives. Pete grew up in the tight-knit North Avondale neighborhood of Cincinnati, Ohio where he formed lifelong friendships. He looked up to his older brothers, Charles “C-ash” and John “Skip”, both of whom predecease him. He was a graduate of Walnut Hills High School, class of 1947, an avid member of the Chatterbox newspaper and on the swim and tennis teams. Pete attended Harvard College, graduating Phi Beta Kappa in 1951, member of Varsity Tennis and Swimming. After college, he joined the Central Intelligence Agency, served in the US Army as a Lieutenant. After his service, he began his journey with the law at Harvard Law School (LLB 1958). He specialized in labor and employment law for more than 50 years, primarily advising and litigating for individuals including wrongful dismissal and discrimination cases. Pete and Marvin Kraus, a childhood friend friend and Harvard classmate, founded the law firm of Tobias & Kraus in 1976. The firm continues on to this day as Tobias, Torchia & Simon. He was the author of ten published articles in the field of labor and employment law, and has made over 150 presentations to Bar Associations and other groups concerning employee rights. In 1985, Pete founded the National Employment Lawyers Association (NELA) (Advocates for Employee Rights) and served as its first Executive Director, Chairman and Editor of the newsletter The Employee Advocate. He was Co-Founder and was Chair of Workplace Fairness (formerly National Employee Rights Institute). He was the author of a three volume work: Litigating Wrongful Discharge Claims (Callaghan/West 1987) and co-author of Job Rights and Survival Strategies - A Handbook for Terminated Employees (Workplace Fairness 1997). He was executive producer for Workplace Fairness of Federal Employees Legal Survival Guide (Authors Passman & Kaplan law firm)(1999). He was Editor-in-Chief of Workplace Fairness' Employee Rights Quarterly (Aspen Publishers July 2000 first issue). In times of leisure, Pete pursued his passions of tennis, swimming and skiing well into his 80s. As a young man he developed his other lifelong passion of worldwide travel leading a group of students in the UK on the Experiment in International Living. He continued this by organizing and leading groups of NELA lawyers on cultural explorations of foreign legal systems in far-flung destinations such as China, South Africa, Argentina and numerous European countries. After a wonderful career of more than 50 years of practicing law, Pete retired in 2018 and he and Phyllis moved to Idaho Falls to be with family. He is survived by Phyllis as well as his daughter, Eliza Tobias Sharp (Matthew), his step-daughters Sarah Vlach (Mark Holbrook) and Susan Wilson, and his grandchildren, Helen and Constance Sharp, Hans and Hannah Holbrook and Sam Wilson. His family brought him untold happiness through the years, including his many nieces and nephews who mourn his loss as well. Services will be held at 4:30, April 8 at Wise Temple, 8329 Ridge Road, Cincinnati, OH. In lieu of flowers contributions in Pete’s memory can be made to National Employment Lawyers Association (NELA), https://www.nela.org; or Wise Temple, https://www.wisetemple.org or the charity of their choice.

The family of Paul Henry Tobias created this Life Tributes page to make it easy to share your memories.