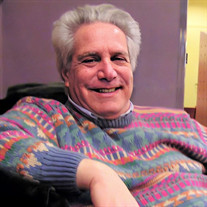 Paul L. Bernheimer died on July 18. A graphic artist by trade, the lifelong Cincinnatian was 74 years old and had been living with Parkinson’s Disease and dementia for several years. But that is just the barest outline of Paul’s life. There was so, so much more to him and the life he led. He was a devilishly witty guy, a one-man repository of humor who seemed capable of firing off the perfect one-liner at the drop of a hat. And, when the occasion demanded it, he wasn’t averse to lacing a joke with a dollop of cattiness. It could be hard to define Paul, because he was a bundle of contradictions. He was a healthy eater, for instance, but no road trip was truly underway until he stopped to buy the biggest possible bag of Nacho Cheese Doritos. He was as comfortable at an elegant theater opening as he was traveling to the Bucyrus Bratwurst Festival. Though Paul rarely sought the limelight, his height – he was 6’ 3” – and his deep, booming voice always gave him a larger-than-life presence. It probably didn’t hurt that his trademark sweaters were kaleidoscopically colorful. Paul loved his vintage MG. And Sasha, a cat who only ever treated him with disdain. He had decades-old plants that grew so large they resembled the man-eating greenery from “Little Shop of Horrors.” He loved to bake bread. And eat chocolate. Lots of it. His block-style handwriting was impossibly neat and so distinctive that he could have trademarked it as the “Bernheimer” font. While he was a student at the University of Cincinnati’s College of Design Art, Architecture and Planning, he helped create high-end interior displays at Shillito’s department store in downtown Cincinnati. As the company went through numerous name changes over the years, he came to call it “ShilLazaRike’s.” During the 1970s-1990s – the golden age of promotional graphics – you could see Paul’s work everywhere in Greater Cincinnati; in ads for Riverbend concerts, on posters for Cincinnati Ballet and Playhouse in the Park and promoting Summerfair, of which he was a founding member. Paul’s greatest love, though, was visual art, specifically the Expressionist artists. He would think nothing of traveling halfway across the country to see a small exhibition of a favorite painter’s works. Chicago. Washington, DC. St. Louis. Cleveland. He visited those cities and more dozens of times in order to commune with art that moved him. Unlike many graphic artists, Paul made a successful transition as graphic design morphed from a glue-and-X-Acto-knife business into one of computers. It was during part of his self-imposed re-training – he got a Master’s from Miami University – that he grew deeply involved in a host of community-based organizations. He was a graduate of Leadership Cincinnati’s Class X, for instance, and was on the boards of Regional Youth Leadership, the Harriet Beecher Stowe House and later, became a member of The Cincinnatus Association. Though Paul was extraordinarily private, once he decided you were a friend, it was the beginning of a lifelong relationship. Paul was predeceased by his parents Ruth and Walter Bernheimer. He has one brother, Tom Bernheimer, of Lakeside Park, Ky. There are no plans for a memorial service. After cremation, his ashes will be scattered at a location in Michigan near where the family spent summers during his childhood. In lieu of flowers, you might consider a gift to one of Paul’s favorite organizations; National Public Radio, the Playhouse in the Park, Cincinnati Ballet, Cincinnati Art Museum, Art Institute of Chicago or any other group you feel appropriate.

Paul L. Bernheimer died on July 18. A graphic artist by trade, the lifelong Cincinnatian was 74 years old and had been living with Parkinson&#8217;s Disease and dementia for several years. But that is just the barest outline of Paul&#8217;s... View Obituary & Service Information

The family of Paul Louis Bernheimer created this Life Tributes page to make it easy to share your memories.