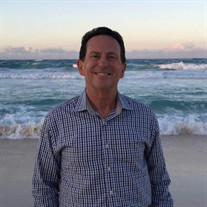 Oscar Jarnicki, age 67, passed away on January 16, 2021. He was the beloved husband of Cindy (nee Gordon), to whom he met in high school and was married for 45 years; devoted father of Michael (Jessi), Steven, and Sarah. He leaves behind two grandchildren that he cherished, Blake and Devin Jarnicki. He is also survived by his siblings Trudy Lorin, Harold Jarnicki, and Sally Schwartz. Oscar was a life-long citizen of Cincinnati and the child of Holocaust survivors (the late Ike and Rebecca Jarnicki). He was loved by many relatives and friends. Starting at a young age, Oscar had entrepreneurial “ideas and dreams.” One of these was a summer day camp he started at the former Amberly Swim Club. Professionally, in 1981, Oscar made his dreams a reality when he purchased his first nursing home in Morrow, Ohio. After this purchase, he built as well as bought several additional nursing homes, assisted living, and independent living facilities. He cared for his patients and employees like family. After selling his last property in 2016, Oscar served on the Board of Trustees of The Jewish Home of Cincinnati and then became President of the organization in 2018. Oscar and Cindy enjoyed traveling together, and even more extensively after his retirement. He loved all types of music, especially Rock ‘n’ Roll, and enjoyed performing as part of the “The 4 Hubcaps” band. Until September 2020, he was regularly riding 30+ miles at a time with his weekend bike group. Oscar spent much of his leisure time working out, enjoying yoga, and golfing with the guys. He was passionate for helping others and will be deeply be missed by all. May his memory be a blessing for everyone that knew him. Private Services. In lieu of flowers, please make memorial contributions to the the Senior Center at the Mayerson Jewish Community Center,Congregation Etz Chaim, or Adath Israel Congregation. Service Recording: https://us02web.zoom.us/rec/share/-t4etCU4xnAtworEk4-Fmuik_VC0xLovbfThbakqN4K7gg9c33b3f8innvRTWQJ4.eNJSUvTOyhKTH7D2

Oscar Jarnicki, age 67, passed away on January 16, 2021. He was the beloved husband of Cindy (nee Gordon), to whom he met in high school and was married for 45 years; devoted father of Michael (Jessi), Steven, and Sarah. He leaves behind two... View Obituary & Service Information

The family of Oscar Jarnicki created this Life Tributes page to make it easy to share your memories.