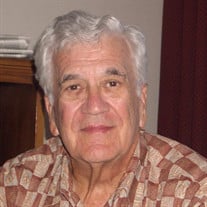 MORTON LEONARD HARSHMAN, MD CINCINNATI-Morton Leonard Harshman, MD, of Cincinnati, Ohio, aged 89 passed away on August 21, 2021 after a courageous battle with Parkinson’s Disease. He was born in Youngstown, Ohio. He was the son of Benjamin and Lillian Harshman, the youngest of nine siblings. Morton attended The Ohio State University and received his Bachelor of Science degree in 1953 and his Doctorate of Medicine degree in 1957. While at Ohio State he met the love of his life, Barbara. They were married for 64 years. Morton (Maishe, to his family) served in the Navy for two years, moving to Cincinnati in 1958. There he opened his medical practice and saw patients for 32 years until his retirement in 1992. Not content sitting around, he became an Associate Medical Director at Western & Southern in 1993 where he worked full-time for 7 years. He remained on as a consultant until his death. Morton will be remembered for his dedication to the medical community, Jewish community, and the arts community. He served as President of Bethesda Hospital, was on the board of the Jewish Federation of Cincinnati, Jewish Family Services of Cincinnati, P.I.E. Mutual, the Cincinnati Chamber Orchestra, and the Cincinnati Opera. He was an active member of the Cincinnati Symphony Association, the May Festival, and the Alzheimer’s Association among his many contributions to the city of Cincinnati. One of Morton’s favorite joys was spending time with his family, whether it be flying to Myrtle Beach in his V-35 Bonanza single-engine plane, on his houseboat on the Ohio River, or waterskiing in Cumberland, Kentucky. He and Barbara traveled to Israel, Canada, Switzerland, Germany, England, France, Mexico, and Italy. He will be remembered for the twinkle in his eye and his sharp sense of humor. Whether it was a patient in his office, a fellow opera lover, or an associate at Western & Southern, Morton left an indelible impression of his zest for life and love of a good story. He is survived by his devoted wife Barbara, daughters Beth Harshman Dolinger (Ron Dolinger) of Columbus and Melissa Harshman (Frank Saggus) of Watkinsville, his 3 grandchildren (Bari Dolinger (Avi Gorbacz), Molly Dolinger, and Stella Rose Saggus), and 3 great grandchildren (Leizer, Chani, and Yisroel Meir Gorbacz) as well as his sister, Sarah Rosenzweig and sisters-in-law Florence Harshman and Joan Harshman. PRIVATE SERVICE FOR FAMILY ONLY Wednesday, August 25, 1:00 P.M. at the Weil Kahn Funeral Home, 8350 Cornell Road, Cincinnati, Ohio 45249. The Service will be live streamed at this website for the public. In lieu of flowers the family requests donations in Morton’s memory be made to the Cincinnati Opera at https://www.cincinnatiopera.org.

MORTON LEONARD HARSHMAN, MD CINCINNATI-Morton Leonard Harshman, MD, of Cincinnati, Ohio, aged 89 passed away on August 21, 2021 after a courageous battle with Parkinson&#8217;s Disease. He was born in Youngstown, Ohio. He was the son of Benjamin... View Obituary & Service Information

The family of Morton Leonard Harshman MD created this Life Tributes page to make it easy to share your memories.