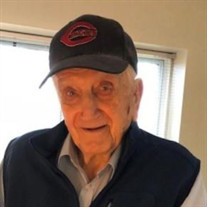 MILTON ASH (WWII VET) MASON-Milton Ash passed away peacefully on August 8, 2020, at Cedar Village Retirement Community, approximately a month shy of his 99th birthday. He had hoped to make it to 100, but he never recovered after breaking his hip on April 30 of this year. Milton was born on September 11, 1921 to parents Samuel and Margaret Ash, in Oakland, California. Milton had a sister, Gertrude, who passed away in 2015. Milton’s parents met in New York City after coming to this country from Eastern Europe through Ellis Island. His mother did not read or write, and his father went to night school to learn to speak and write English. Yet their son, Milton, earned a Ph.D and ultimately became an internationally-known nuclear physicist. Prior to becoming a physicist, Milton enlisted in the Army Air Corps (predecessor to the U.S. Air Force) in 1943 and served as a navigator in an 11- manned B-29 in the Asiatic-Pacific Theater in World War 2 until his honorable discharge as a First Lieutenant in 1946. After the war, Milton finished his bachelor’s degree in Electrical Engineering at the University of California at Berkeley, where he met his wife, Shulamite Dolnick, who was visiting from Chicago. Milton and Shulamite married in Chicago on January 16, 1949, and remained married until Shulamite’s death on January 31, 2018 – 69 years. Milton earned his doctorate at the Illinois Institute of Technology through evening courses while he worked during the day. Milton moved his family from Chicago to Santa Monica, California in 1957 to take a job in the burgeoning defense sector in Southern California. Milton retired in 1986, after working for several defense companies. He spent his career in service to his country – he fought in the “hot” war, and then helped keep America defenses strong during the Cold War. Milton taught at UCLA and wrote several well-regarded books on nuclear reactors and nuclear reactor physics. A significant event in Milton’s life was the year the family spent in Israel in 1964-65, where Milton worked at Koor Industries. He also taught nuclear reactor physics at the Technion, Israel’s version of MIT/Caltech. Milton’s year in Israel was the culmination of the deep connection that Milton shared with his wife Shulamite for the State of Israel and the continued thriving of the Jewish people. After retirement, Milton enjoyed his hobbies as an amateur radio operator and was a member of amateur radio and computer clubs in Southern California. Milton and his wife moved to Cincinnati in 2014 to live in the Jewish retirement community of Cedar Village in Mason, Ohio. While at Cedar Village, Milton wrote for the community newspaper, Chai Times, mostly about his experiences during his Israeli sabbatical. He also lectured on scientific topics at Cedar Village and planned a lecture on Cosmology in the fall. Milton is survived by his three children, Avner (Rosemary), Mimi, and Reuel (Linda), grandchildren Danny (Ryoko), Alexandra (Michael), Sarah (Toni), Elisheva (Shivaram) and Emily, great-granddaughter Liana, and several nieces and cousins. Private graveside services Monday, August 10, 12:30 P.M. (See Below for ZOOM Info) In lieu of flowers, memorial contributions to AMEINU or Jewish Family Services would be appreciated. Topic: ASH SERVICE Time: Aug 10, 2020 12:30 PM Eastern Time (US and Canada) Join Zoom Meeting https://us02web.zoom.us/j/88512824169?pwd=Szd3K1ZqTkZNTlRnQjZuQjFYQ1gvQT09 Meeting ID: 885 1282 4169 Passcode: 336832

MILTON ASH (WWII VET) MASON-Milton Ash passed away peacefully on August 8, 2020, at Cedar Village Retirement Community, approximately a month shy of his 99th birthday. He had hoped to make it to 100, but he never recovered after breaking his... View Obituary & Service Information

The family of Milton S. Ash created this Life Tributes page to make it easy to share your memories.