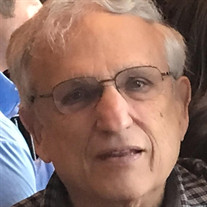 Mark Ansel Moskowitz, a quintessential family man who worked for the eponymous scrap metal and recycling company for nearly a half-century, died on November 29, 2020. He succumbed to complications of Parkinson’s disease at age 78 after a characteristically valiant fight. As part of Moskowitz Brothers’ third generation, Mark A. Moskowitz played a key role helping the recycling business remain an industry leader before he passed. Moskowitz Bros was started in 1901 in Cincinnati before becoming a premier scrap metal company, servicing worldwide markets. Mark Moskowitz served on the Board of the Institute of Scrap Recycling Industries. Regardless of all his success, Moskowitz most cherished his three grandkids, two of whom were named after his parents: Ben (a son of the company’s co-founder) and Charlotte Moskowitz (nee Andelman). Born in Cincinnati on December 29, 1941, Mark graduated from Walnut Hills High School before attending the University of Michigan: At Michigan, Moskowitz was a member of the Sigma Iota chapter of Sigma Alpha Mu, and remained close with his fraternity brothers throughout his life. After Michigan he earned an MBA from the University of California-Berkeley. Moskowitz used a strong work ethic to parlay his intelligence. He became a First Lieutenant in the U.S. Army. Throughout his life, he earned numerous achievements, including becoming a Kentucky Colonel, the highest title of honor bestowed by the state to a broad range of notable people. He was an avid Reds fan, and proud season ticket holder of the Bengals ever since their inaugural season (1968). Mark Moskowitz enjoyed spending his free time with his children and grandchildren – much of the time spent at sporting events and traveling. He traveled for University of Michigan football games, especially when his only son, Craig, attended the school in the early 90s. In most recent years, Mark frequently visited his daughter’s family in Bethesda, Maryland where he got much happiness on the benches cheering his grandson Ben on at hockey and little league games. Most importantly, to Mark, was being with family. Moskowitz was a global traveler with his wife, Susan, of 50 years. With a sturdy build at 5-11 and 200 pounds, he played softball at the Jewish Community Center well into his forties and loved playing golf at Crest Hills and Losantiville Country Clubs, especially with his son. He was a Founder and presenting sponsor of the Cedar Village Golf Classic; and served as the President of the Wyoming Swim Club. He was instrumental in the merger of the Orthodox Jewish Home for the Aged and Glen Manor into Cedar Village. He was also an honorary Trustee of Cedar Village. A voracious reader, Moskowitz relished learning every day — and applying his knowledge. Friends and family knew him best as strong-willed yet genuine with a kind heart. His survivors include his wife, Susan (nee Gordon), daughter Carolyn Lieberman (married to Stephen) and his son Craig (Monica). Moskowitz’s three grandchild are Ben Lieberman and Henry and Charlotte Moskowitz. He is also survived by his beloved brother, Ivan (Debbie) Moskowitz and beloved sister, Ann (Michael) Rosenblatt along with his nephews Charlie (Lissy) Moskowitz, Jon (Amanda) Moskowitz, Cory Rosenblatt, and Ben Rosenblatt. In lieu of flowers, the family requests donations be made to the Michael J. Fox Foundation, or the New York Stem Cell Foundation in memory of Mark A. Moskowitz.

Mark Ansel Moskowitz, a quintessential family man who worked for the eponymous scrap metal and recycling company for nearly a half-century, died on November 29, 2020. He succumbed to complications of Parkinson&#8217;s disease at age 78 after... View Obituary & Service Information

The family of Mark A Moskowitz created this Life Tributes page to make it easy to share your memories.