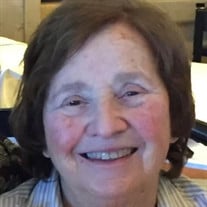 Marianne Kaelter Pressman,84, a resident of Cedar Village, passed away on September 1, 2021. She was the beloved wife of the late Hal Pressman. She is survived by her sister, Bonnie Kaelter (David) Milenthal, her two children Jody Pressman (Todd) Schweiger and Jeffery Pressman, and her four grandchildren Cassidy Pressman, Austin Pressman, Dana Schweiger, Mallory Schweiger (Torrey) Tarschis, Robin Pressman (the late Peter Cooper) and Michael Pressman.   Marianne was born in Danzig,Germany (now Gdansk, Poland) to the late John and Else Kaelter. At the age of 18 months, she immigrated to the United States with her parents who were fortunate to escape the threat of Nazi Germany.  Marianne graduated from Walnut Hills High School in Cincinnati in 1955 and attended The Ohio State University and University of Cincinnati receiving a BS degree in Psychology and Social Work. She built an illustrious career in public service, serving first as one of the few early women officers in the Cincinnati Police Department working primarily with juveniles. Marianne, Hal, Jody, and Jeffrey lived in California from 1967-1979 and she worked as a social worker for an adoption agency, traveling to Korea to escort Korean babies to their adopted parents in the United States. The Pressman family returned to Cincinnati in 1979.  Marianne joined the National Council of Jewish Women and started a program with WLW-T called “Five on Your Side”, recruiting volunteers from NCJW to help run the program. Marianne became so interested in consumer rights, that at the age of 48, she attended the Salmon P. Chase Law School at Northern Kentucky University earned her law degree at age 50. She went on to become a longtime Assistant Attorney General in Civil Rights, serving under four elected Attorneys General of the State of Ohio. She was elected to the City of Amberley City Council in 1987 and served as Mayor of Amberley from 1998 to 2001. Marianne and Hal loved to travel and visited many places throughout the world.  As an outgoing and vivacious person, Marianne made friends easily and became longtime friends of many she and Hal met on their travels. When they returned to Cincinnati she reconnected and resumed friendships with many people who she knew growing up in Cincinnati and made many more new friends. She will be sorely missed by so many. Private Graveside Services Sunday, September 5 at 1:30pm. The service will be live streamed via Zoom. In lieu of flowers memorial contributions in her honor to the Cincinnati Jewish Family Services Center for Holocaust Survivors or the Cincinnati Animal Care Humane Society would be appreciated.  Service Recording: https://us02web.zoom.us/rec/share/Cie9dFbIew1x-7O4ZPGvUHz80aO7ot_VparLotVsBqR-QO9P0OvZlnEjkV4vzkxo.T-rSbwD2Zw41X1YA

Marianne Kaelter Pressman,84, a resident of Cedar Village, passed away on September 1, 2021. She was the beloved wife of the late Hal Pressman. She is survived by her sister, Bonnie Kaelter (David) Milenthal, her two children Jody Pressman... View Obituary & Service Information

The family of Marianne Pressman created this Life Tributes page to make it easy to share your memories.