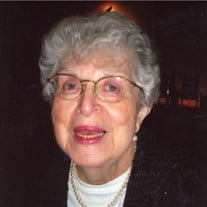 Margie (Malowitz Eskin) Reiter of Austin, Texas, died Jan. 22 after a life of caring for others. She was a smart, strong, and wise woman who overcame hardship and tragedy with energy and determination. She was active and sharp-minded almost to the end. She was born March 19, 1924, in Cincinnati, Ohio, to Philip and Mary (Lipsky) Malowitz. She graduated from Hughes High School in 1942, married Sam Eskin in 1947, and raised their daughter, Karen. Marge was an active member of Cincinnati’s JCC, Golf Manor Synagogue and Northern Hills Synagogue and worked 25 years for the IRS. Sam Eskin died in 1982. Three years later, she and some friends took a Bahamas cruise, and Marge met George Reiter of Austin. They married later that year, and after a lifetime in Cincinnati, she bravely moved to Austin, where she created a second life and gained a large second family. Marge and George were active in Austin’s JCC and Congregation Agudas Achim Synagogue, where Marge created programs for seniors. There she became a bat mitzvah at age 67 and read from the Torah for her following birthdays into her 90s. She was the oldest woman to read Torah at her the synagogues. She and George volunteered at Austin’s Paramount Theater and the Austin Symphony. They were docents at the LBJ Library for over 20 years and Marge was proud to have known Lady Bird Johnson. Marge was a skilled seamstress, knitter, and baker, creating for family and friends and donating to those in need. George died in 2010, and Marge continued an active life with her many loved and loving friends. She was especially treasured by her synagogue community. She spent her last years at Brookdale Senior Living, where she brought in speakers and participated in groups contributing to the assisted living center. In addition to two husbands, she outlived her daughter, Karen Fisher, and granddaughter Elyssa Levin. She is survived in Cincinnati by her son-in-law, Philip Fisher, and grandchildren Harris Kastner and Paulina (Martin Thoma) and Bayla Fisher. In her Texas family, she is survived by daughter Helen and Michael Paulsen, grandchildren Mariana (Tony) Tartt, Mark (Kathy) Paulsen, and Rachel (Jerome) Pudwill. She also had nine great-grandchildren and two great-great-grandchildren. In addition, she leaves cousins, nieces and nephews and her beloved friends, Sigrid Levi-Baum, Michael Baum, and Jeannette Brickman. The family asks that donations be directed to Congregation Agudas Achim, Rabbi’s Discretionary Fund, CAA-Austin.org Service Recording: https://us02web.zoom.us/rec/share/imPiz42DcnEnEZ0DqbjJquOY-7Md39dqNkdFCDXC0L7jswTzKhf5FF0hMyXPs7Cj.3nrup4WPYshB7Mcc

Margie (Malowitz Eskin) Reiter of Austin, Texas, died Jan. 22 after a life of caring for others. She was a smart, strong, and wise woman who overcame hardship and tragedy with energy and determination. She was active and sharp-minded almost... View Obituary & Service Information

The family of Margie Reiter created this Life Tributes page to make it easy to share your memories.