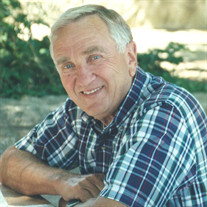 Lee J. Workum, Jr. died peacefully at home on June 30, 2021, he was 91 years old. Lee was born in Cincinnati, Ohio on June 4, 1930, to Lee J. and Aimee Workum. After graduating from Walnut Hills High School, he attended Miami University and graduated with a mathematics degree. He then began what became a life-long mission to serve. He enlisted in the United States Navy and served in the Korean war rising to Lieutenant by the time he completed his military service. After completing his commission with the Navy, he headed to Leland, Michigan where he had spent his summers every year since 1936. It was in his beloved Leland that he met his wife and lifetime best friend, Nikolina “Nikki” Brauner. They were married on November 7, 1959 and started their life together in Cincinnati. After working in the family business, he began his career in construction management. He was instrumental in the project management and construction of the Williamsburg Apartment Complex, one of the very first premier and luxury living complexes in Cincinnati, and then concluding his career with Hills Properties. While work was important to Lee it was his family and community that were his true calling. Lee and Nikki had 3 children, Lee, Eric and Taya and they spent their life together in Wyoming, Ohio. He became involved in the community and was recognized many times for his volunteer work and all his hours of dedication to Wyoming and to the school system. Lee was a man who personified “community”. He was recognized as the Wyoming Citizen of the year for his countless hours of time and talents on a variety of Wyoming activities and organizations including May Fete, Wyoming Schools Athletics projects, Burns Farms Bunch Bluegrass Festival, and the Wyoming Civic Center Board. His ingenuity and can-do attitude proved extremely beneficial to the annual May Fete celebration. He created and built custom pipe booths which simplified the setup process and are used each year at the fund-raising event. In 1979 he was named “Booster of the Year” by the Wyoming Schools Athletic Department after spearheading general improvements and a new concession stand and batting cages at their athletic field. He was also recognized as a “Friend of Education” which is presented by the Ohio Chapter of the National School Public Relations Association and is awarded to individuals or businesses that have made a significant contribution to their community school. But Lee’s desire to serve was not only extended to his own community, he also volunteered with People Working Cooperatively (PWC). He was inducted into the Dan Ober Volunteer Hall of Fame which honors PWC volunteers who have given 20 or more years of service to the organization. And, finally, Lee was recognized by the Cincinnati Enquirer as a “Hometown Hero” after giving countless hours of volunteer time to help oversee the expansion of three Wyoming primary schools. Then Superintendent Robert Yearout credited him for his work with the construction company to get the projects completed on time for the school year to begin. In his spare time Lee had two great passions: flying and sailing. One of his true joys was the day he purchased a single engine aircraft - a Beechcraft Debonair. He loved to buzz the lake house as the signal for the family to come pick him up at Sugarloaf Airport. Growing up on Lake Leelanau he became a proficient sailor and spent many hours on the lake and volunteering his time at the Leland Yacht Club. He loved to work with the young sailing community but especially loved taking his grandchildren out to share his knowledge and passion. He competed in local regattas and in the LYC racing series on his seasoned Laser but at 75 years young he got a new Laser and sailed on it through the summer of his 85th birthday. He then passed on his skipper’s cap to his family members and encouraged them to continue the tradition. Lee is survived by his wife of 61 years, Nikolina, children Lee III (Jenny) Workum, Eric Workum and Taya (Matt) Workum-Byers, grandchildren, Lee IV, Katherine and Nico, many very special nieces and nephews and countless friends from two wonderful communities, Wyoming, Ohio and Leland, Michigan. A celebration and recognition of Lee will be held at Leland Country Club on Saturday, July 10 from 3:30-5:30. In lieu of flowers the family suggests donations in Lee’s honor to Fishtown Preservation Society, P.O. Box 721, Leland, Michigan 49654 or The Leukemia and Lymphoma Society, P.O. Box 98018, Washington DC 20090-8018. Fair winds and Following Seas Lee Workum. You will be missed.

The family of Lee J. Workum Jr. created this Life Tributes page to make it easy to share your memories.