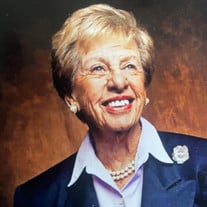 JUSTINE RODNEY SOLOMON CINCINNATI- On 12/30, 2021, Justine (Juddy) Solomon had her hair and nails done, went out to lunch, attended a lecture, had her 5:00 refresher, ate dinner and spoke with loved ones. She retired to bed and did not awaken,... View Obituary & Service Information

The family of Justine R. Solomon created this Life Tributes page to make it easy to share your memories.