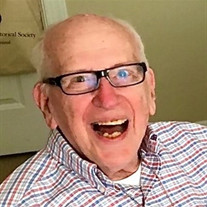 John Gabriel Schwab, 91, died peacefully on May 30, 2017 at Cedar Village surrounded by his loving family. He was born at the Cincinnati Jewish Hospital on May 26, 1926 to the late Herbert and Hannah (Workum) Schwab of Cincinnati. John grew up in North Avondale and was a proud lifelong resident of Cincinnati. He served in the US Army during WWII and courageously fought in the Battle of the Bulge. After the war, John enrolled at the University of Cincinnati graduating with a degree in Business Economics. In the early 1950’s, he became a Vice President at his grandfather’s wholesale diamond business, A.G. Schwab & Sons. When the diamond business sold in the mid 1960’s, John joined Gillman Knitwear which he grew for over 25 years. One of the strongest influences in John’s life was his mother, Hannah, who instilled tremendous family values and the principle of giving back to the community. John volunteered for the Cincinnati Red Cross, like his mother before him, for nearly two decades. John was a recipient of several Red Cross honor awards. He was a loved volunteer for the Cincinnati Historical Society, where he gained tremendous knowledge researching the Jewish history of Cincinnati. Additionally, John was a key volunteer at the Cincinnati VA Medical Center. He leaves behind many friends who welcomed his advice on everything from their relationships to their careers. John was a long-standing member of the Valley Temple. Like his parents, he was a lifelong member of Losantiville Country Club. John was preceded in death by his parents, Herbert and Hannah Schwab, his treasured twin sister, Joan Schwab Merrill (Robert) of Cincinnati, and his loving sister Nancy Schwab Schild (Julius) of Cincinnati. He leaves his doting younger brother Richard Schwab and his wife Nancy of Greater Philadelphia, his devoted daughters, Jody Schwab Prunier and her husband, Stephen of Carmichael, CA., Cathy Schwab Prichard and her husband, Lance, of Falmouth, ME. John also leaves behind five grandsons, Hunter Prichard of Bar Harbor, ME, Chadwick Prichard of West Hollywood, CA and Hudson, Harris and Holden Prunier of Carmichael CA. John leaves behind his adoring former wife and friend, Barbara S. Reckseit along with 10 nieces and nephews. John’s family would like to thank the wonderful staff at Cedar Village for their kindness and care, as well as family friends David Alex, Rob and Rosa Martin, Dr. John Schneider, Dr. Robert Wones, all of Cincinnati and all the wonderful family and friends who stood by him for many years. A graveside service will be held at the United Jewish Cemetery – In Walnut Hills, 3400 Montgomery Road, Cincinnati, 11am on Friday, June 2, 2017. The service will be followed by a gathering of family and friends. At the request of the family, all remembrance gifts may be sent to the Red Cross, Cincinnati VA Medical Center, the Cincinnati Historical Society and the Valley Temple.

John Gabriel Schwab, 91, died peacefully on May 30, 2017 at Cedar Village surrounded by his loving family. He was born at the Cincinnati Jewish Hospital on May 26, 1926 to the late Herbert and Hannah (Workum) Schwab of Cincinnati. John grew... View Obituary & Service Information

The family of John G. Schwab created this Life Tributes page to make it easy to share your memories.