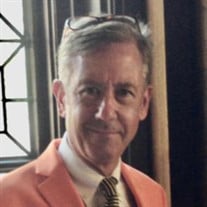 John R. Guggenheim, of Indianapolis, IN passed away Tuesday, October 19, 2021 with his wife, Ann, daughter, Patty and son, Michael by his side. John was born 1953 in Wyoming, OH, the son of Barbara Kuhn Guggenheim, surviving. and Jack Albert (2019). Survived by Ann, wife of 40 years, children; Patricia and Michael. Brother Peter (Susie) sons, Kyle, Dylan, daughter Carly, Brother Steve (Kathy), sons, Corbin, Chase, daughter Lacey. John was one of the kindest, most gregarious and afable men known to his family and friends. His relationship with his children, brothers and their families was genuinely treasured. He loved Indianapolis, but his hometown of Wyoming, Ohio held a special place in his heart. John graduated from Butler University in 1976 and was a member of the Sigma Nu fraternity where he presided as social chairman most of those years. John worked until his untimely death at Rubin & Levin, law firm. He enjoyed working and planned to continue as long as possible. He continued as social chairman for his family and friends welcoming many to his home for numerous festive events. John traveled much of Europe and Africa in high school and scores of times to Jackson Hole, WY where he attended Teton Valley Ranch Camp and sent both children there. They all became proficient at roping and riding. John took many trips to Los Angeles to see Patty perform in the Groundlings Theater. Michael and John shared a love for photography and short film making. Inspired by Jack Guggenheim the tradition carries on. John volunteered at the Eiteljorg Museum for 15 years and was Chairman of the Chili Cookoff several times. A patron of the arts, John would often feature works of established and aspiring artists in the law firms where he worked, hosting events to introduce their work. He also was the event planner for law firm events. John was an excellent groundskeeper at his home and enjoyed making special venues throughout. Every Sunday night John was the chef and researched delicious dishes to cook for Ann to prepare her for the week when she began teaching. He really knew how to make life fun. That came very naturally to him. John made everyone he met feel special and everyone who met him feels the loss of his passing. Vibrant, colorful, dignified, funny, clever, brillant, a joyful, old-world gentleman, a heart-centered appreciation for existence emanated from his soul. He is an example to live by. Memorials can be made to the Guggenheim Fund for Visual Arts, North Central High School, www.advancementcenterwts.org/online-giving-form or to the Transplant House of Cleveland, www.transplanthouseofcleveland.org

John R. Guggenheim, of Indianapolis, IN passed away Tuesday, October 19, 2021 with his wife, Ann, daughter, Patty and son, Michael by his side. John was born 1953 in Wyoming, OH, the son of Barbara Kuhn Guggenheim, surviving. and Jack Albert... View Obituary & Service Information

The family of John Robert Guggenheim created this Life Tributes page to make it easy to share your memories.

John R. Guggenheim, of Indianapolis, IN passed away Tuesday,...