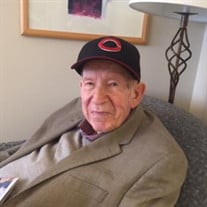 Jay Jerome "Jerry" Mark passed away peacefully on March 20 after a brief illness. He was 92. Jerry was a lifelong Cincinnatian, a hard-working, respected neighborhood druggist/small businessman/pharmacist, husband/partner to his childhood sweetheart, Bernice "Neecy" Grusd for nearly 72 years and devoted father of four. He was a kind-hearted, decent, good man with a dry sense of humor. He grew up in the North Avondale section of town - a good student and good athlete (especially in baseball). He went on to Walnut Hills High School and the (UC) College of Pharmacy. After graduating from pharmacy college, he began working for his father at Maurice Mark Drugs on Reading Road in North Avondale. In the early 1960s, he opened his own store, Jerry Mark's Pharmacy, which became a fixture in Finneytown for nearly 20 years. A few years later, he bought Lahrmann Pharmacy in Clifton near the UC campus. He also spent many years working for CVS -primarily in Mt. Lookout- until he retired at 81, an age his wife Bernice thought too young! Over the last five years, he lived at the Senior Star at Kenwood, an independent living retirement community where he was surrounded by friends and family, including many friends and classmates from his early North Avondale days. He would joke that he couldn't tell you what he’d had for lunch, but could easily recite the street addresses for his neighbors from nearly 70 years ago when they were his drug store customers back in the late 40s/early 50s. Besides his wife, he is survived by three sons, Stan (Paula Prewett) of Savannah, Ga., Marvin of Phoenix, and Larry, of West Hollywood, Ca, a sister Patricia (Darryl) Blitzer of Cincinnati, two grandsons, Danny Mark of Austin, Tx, and Stephen Mark of Tucson, and two granddaughters, Maddie and Emily Mark, both of Brooklyn, N.Y. He was preceded in death by his daughter, Debbi, who passed away in 2016. There will be a private graveside service. In lieu of flowers, memorial contributions to Adath Israel Congregation of Cincinnati, the American Civil Liberties Union or a charity of your choice would be greatly appreciated. Service Recording: https://us02web.zoom.us/rec/share/eN6O0b9K-40KWc2qehkNJq9oFkBlK4pRS1zvbycXKzs4xM9xnWl84GFUX6oNQR5U.C-CwXs_YUmMESQ_3

Jay Jerome "Jerry" Mark passed away peacefully on March 20 after a brief illness. He was 92. Jerry was a lifelong Cincinnatian, a hard-working, respected neighborhood druggist/small businessman/pharmacist, husband/partner to his childhood... View Obituary & Service Information

The family of Jay Jerome "Jerry" Mark created this Life Tributes page to make it easy to share your memories.

Jay Jerome &quot;Jerry&quot; Mark passed away peacefully on March 20 after...