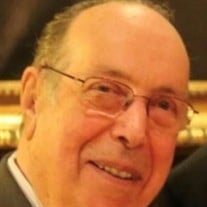 Henry M. Bochner passed away on May 2, 2021 in Glen Allen, Virginia, at the age of 92. He leaves behind Sondra Bochner, his wife of 48 years; his son Glenn (Nellie) Bochner of Cincinnati and Jerusalem, his son Rabbi Shalom (Shoshana) Bochner of Berkeley and Modesto, California, his stepson Glenn (Marilyn) Shaye of Cincinnati, his stepdaughter Dr. Robin (Dr. David) Disler of Richmond, Virginia, his sister Edith of Netanya, Israel, and grandchildren Alec, Matthew, Zoe, Emily, Nitzan, and Yuval. Henry was born in Berlin, Germany in 1928, as the third of four children to David and Dora Bochner, both of whom hailed from Southern Poland. The Bochner family was known as hard workers in the clothing business and loyal citizens of their countries of residence. Henry’s parents both served in the Austro-Hungarian army in WWI. As the situation in Germany worsened for the Berlin Jewish community in the early 1930’s, David Bochner was given sympathetic advice from some Nazi party customers to leave the country quickly. Unlike many of their extended family who perished in Europe, David and Dora heeded the advice, taking their children to Zagreb, Yugoslavia, and then to Cleveland. Henry described his father as living comfortably in both the religious Jewish world and in general society. As the neighborhood surrounding his clothing store in Cleveland became less Jewish, David Bochner understood that he could not continue to keep a store closed on Shabbat in an area that expected stores to be open on Saturdays, so he moved his family to Boro Park-Brooklyn, New York in 1942. Henry was always exceedingly proud of his adoptive country, the United States of America. It welcomed in his family and gave them opportunities to forge their own successes, through hard work and perseverance. He followed his older brother Joe into the military, serving for nearly two years during the Korean War. An important theme in his life was to look forward hopefully, anticipating better times. Despite his family’s experiences in Europe, Henry was even able to accept the overtures of some modern Germany officials when they sought to make amends. As a younger man, Henry held various jobs: he worked in his family’s clothing businesses; he was a sales agent for Pan American Airways; he was a private investigator; he was even a manual bowling pin re-setter for a day. In the late 1950’s, Henry made his way to Albany, NY where he met Joan Corman and married her in December, 1960, together raising sons Glenn and Shalom. Henry attended SUNY Albany, where he earned a degree in Accounting and began his career with New York State. Eventually, he become the New York State Health Administrator for the Kidney Disease Institute. Later, he parlayed his state experiences into opening independent dialysis clinics on Long Island and in Schenectady. In early 1973, Henry married for the second time, to Sondra Shaye, and they were happily married for over 48 years. He warmly embraced Sandy’s children Glenn and Robin. Together, “Hank and Sandy” traveled the world and enjoyed learning about new cultures. These experiences added to his substantial reserve of stories, which he dispensed liberally to willing audiences of family members, friends, neighbors, synagogue kiddush attendees, restaurant staff, cab drivers, barbers, and so on. Henry had a knack for sizing up a situation quickly and correctly and for providing helpful advice. He was a creative person who came up with amazing Purim costumes for his young son. He was quick witted, generating many memorable lines and phrases. He preferred story-style jokes to the one liners, although he would not pass up an opportunity to make others smile. He had a fantastic laugh, almost squealing with delight-- another example of his finding joy in life. Henry was known as a responsible, stand-up person, whom others could count on and whose honesty and integrity were beyond reproach (a mensch). He was good at so many things—like packing a suitcase, mending a garment, cooking a favorite dish (such as matzah brei), dressing for success, finding his way, being punctual, whistling and expressing his feelings of appreciation, concern, and love. And he was a world-champion bear-hugger of family members he hadn’t seen for a while. Henry was very proud to be Jewish and got much nachas from his family members’ involvements in Jewish tradition, rituals, synagogue and community life, education, youth work, Zionism, and music. He took great pride in the accomplishments of the Jewish people and the State of Israel. As a Hebrew School teacher and USY staff member, Henry is still recalled fondly by his students from over 50 years ago. He was a dutiful son and family member, someone whom everyone liked and trusted. Following his retirement at age 61, Hank and Sandy moved with her daughter Robin and her family to Richmond, Virginia. They were blessed to continue their regular travels for the subsequent 29 years. In Henry’s final years, with his memory retrieval a bit diminished, he became even more sentimental and appreciative, more focused on family and taking even greater pride in their accomplishments. Henry will be missed substantially by his family, who feel quite blessed to have had him in their lives for so many years. Contributions in memory of Henry M. Bochner (Chaim Moshe ben David u’Devora) may be made to the Jewish or general charity of one’s choice.

Henry M. Bochner passed away on May 2, 2021 in Glen Allen, Virginia, at the age of 92. He leaves behind Sondra Bochner, his wife of 48 years; his son Glenn (Nellie) Bochner of Cincinnati and Jerusalem, his son Rabbi Shalom (Shoshana) Bochner... View Obituary & Service Information

The family of Henry M. Bochner created this Life Tributes page to make it easy to share your memories.