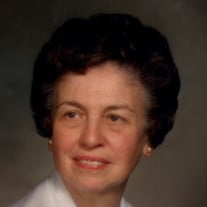 KLEMPNER, Gertrude “Trudy” 1919-2015 Gertrude “Trudy” Klempner was born in Louisville, Kentucky on January 26, 1919. She wa a graduate of Westenr Hills High School Class of 1937. Trudy was ab excellent dancer (she won a waltz competition) and singer (she considered a radio job as a singer) and also studied violin, tap dancing, and theater. Her love of dancing and singing continued throughout her life. After high school, she attended the Miller School of Business. A high mark in her shorthand class led to a 28-year career as a private secretary in the Commercial Engine Contracts department of General Electric Company. During the war, young Gertrude was a volunteer Nurse’s Aide with the American National Red Cross and received recognition for her service with the U.S.O. She was President of B’nai B’rith Woman’s Business and Professional Chapter, Vice President of her sisterhood group, and chairman of publicity in another group. Gertrude loved to travel and visited Japan, Hong Kong, Malaysia, Singapore, New Zealand, Australia, Fiji, Europe, Ireland, and when she went to Israel, she took her frail 75-year-old mother with her. Gertrude’s mother, Rebecca “Becky”, had arrived in America in 1910 aboard the ship Patritsa from Kossow, Austria. She married in Louisville, Kentucky, and when her marriage ended, she moved with her daughter to Cincinnati, where they had a large extended family. Despite having no formal education, Becky had a long and successful career with the Manischewitz Matzo Group. She was an enduring role model of self-sufficiency and cheerfulness. Trudy followed in her footsteps as an independent optimistic career woman, devoted to faith, family, and always lots of fun. She said she liked to “monkey around” and “have a grand time”. They were lifetime members of Adath Israel Synagogue. Gertrude was also preceded in death by her younger cousin Irving “Sonny” Feuer, who had always been like a brother to her. Her life was filled with joy and love of her family. She composed the following poem for her last high school reunion: Golly, how I loved to go dancing It didn’t matter where Nightly, I would itch to go dancing I sure did my share. I tripped sucha light fantastic It was a joy to see My joints seemed to be elastic They weren’t a part of me. I learned all of the latest, all of the greatest styles. My steps couldn’t be lighter, My smiles more brighter than they were Funny, I still love to go dancing I guess I always will. How long can I go on prancing Yet, how can I keep still? Never, no never, nor me! Gertrude will be dearly missed not only by her many extended cousins, Krumbein and Feuer families, but by everyone else with whom she shared her life, joyfulness, and eternal optimism.

The family of Gertrude Klempner created this Life Tributes page to make it easy to share your memories.