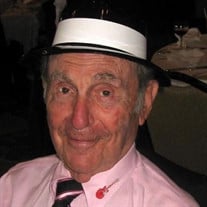 Fred Zorndorf, (WW II) age 94, a native of Cincinnati, son of Abe and Anna Zorndorf, beloved husband of the late Nancy Zorndorf, died on October 7th 2020. Devoted father of Aaron (Helena) Zorndorf of San Francisco, CA. and Maureen (Daniel Barash) Zorndorf of Worthington, OH. Dear brother of the late Shirley Musselman, loving grandfather of Nathan and Zachary Zorndorf and Nora Elstela. Friendly Fred was one of a rare breed of highly regarded Jewish tailors and was the proprietor of Sherman Tailors in Norwood for over 50 years. His father died when Fred was 15. After graduating from Walnut Hills H.S. and serving in Japan during WW II, he returned to help support his mother and sister at the tailor shop under very difficult economic circumstances. He met the love of his life, Nancy Litz in 1953 and they married shortly thereafter. Together they maintained a loving home for their two children. Fred was always active in the Jewish community. As a founding member of Northern Hills Synagogue and cemetery warden there for decades, he was instrumental in shepherding the merger between the old Norwood Synagogue and Northern Hills congregations. Fred gave generously to many Jewish causes throughout his life. Along with his family and Jewish faith, Fred loved golf. The combination of social comradery and physical exercise were a welcome release from his typical 60-hour work week. The store in Norwood was a local institution and social gathering place. He was featured in magazine ads and newspapers. When he closed the shop in 2004 the TV news called it the end of an era. What Fred really loved were the people in his life. He had a vast social network. His work, the synagogue, and his extended family of close friends provided him with rich emotional bonds that enabled a fulfilling retirement. He was extremely proud of his children and his grandchildren. With great diligence and effort, Fred fully recovered from a broken pelvis only last year and maintained a sharp mind and sense of humor until the end. Services were held at the convenience of the family. In lieu of flowers memorial contributions to Northern Hills Synagogue (https://www.nhs-cba.org/Donation.htm) or charity of one’s choice would be appreciated.

The family of Fred Zorndorf created this Life Tributes page to make it easy to share your memories.