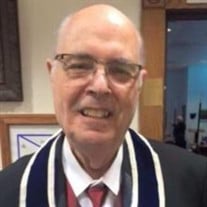 FRANKLYN JACK SARESKY CINCINNATI-Franklyn Jack Saresky, beloved husband, father, grandfather, uncle, and friend to so many, passed away on October 26, 2021. He is survived by his wife Doris (Hess) of 58 years and his sons, Ronald Saresky (Anne) of Maineville, OH and Howard Saresky (Crystal) of Covington, KY. He is also survived by his 3 grandsons, Michael, Joseph and Elias and his nephew Jamie Zamkov (Penny) of Woodbridge, CT and niece, Robyn Salles (Josh) of Larchmont, CT. and several grand-nieces and nephews. He was preceded in death by his mother and father, Pearle and Herman Saresky of New Haven, CT, his brother Harley Saresky, also of New Haven and his sister, Gayle Zamkov of Orange, CT. Frank was born on May 29, 1941 in Waterbury, CT. He was a graduate of Waterbury High School in Waterbury, CT. and gained an Associate’s Degree in Broadcasting from Emerson College. He married his wife Doris on March 31, 1963 in New York City. During their married life, they lived in Waterbury, Connecticut, Cleveland, Ohio, Randolph, Massachusetts, and then ultimately settled and raised their sons in Cincinnati, Ohio. Frank was a Domestics Manager with Caldors in Massachusetts and Hills Department stores in Cincinnati/Midwest. After Hills Department stores, he then opened a drink mix distribution company. After the drink company, Frank drove limousines for over 20 years and had many tales and interesting stories involving his many clients, including many famous movie stars, prominent business people and athletes. He was a member of Avon-Miami Lodge #542. While a member he earned his EA Degree January 23, 1985, FC Degree February 20, 1985. He became a Master Mason on April 17, 1985. In 1992 he was Master of Avon Lodge. In 2000-2002 he was District Deputy Grandmaster. He was an Honorary Member of 3M Lodge #419. Frank had an infectious smile and laugh and a great sense of humor. He had a tremendous knack for sarcasm and telling jokes. He will be forever missed by his family and his numerous friends. Services Weil Kahn Funeral Home, 8350 Cornell Road, Cincinnati, Ohio 45249, Friday, November 5, 2021. A Masonic Service will precede the Funeral Service and begin at 10:00 A.M. Due to Covid Masks are required. Funeral services will be streamed live at https://www.weilkahnfuneralhome.com/obituaries/Franklyn-Saresky/ In lieu of flowers, the family requests that a donation is made to The Dragonfly Foundation of Cincinnati. The family will be receiving friends and family following funeral and gravesite services at the Miami Bluffs subdivision Clubhouse located at 6653 Trail Crossing, Maineville, OH. 45039.

FRANKLYN JACK SARESKY CINCINNATI-Franklyn Jack Saresky, beloved husband, father, grandfather, uncle, and friend to so many, passed away on October 26, 2021. He is survived by his wife Doris (Hess) of 58 years and his sons, Ronald Saresky (Anne)... View Obituary & Service Information

The family of Franklyn Jack Saresky created this Life Tributes page to make it easy to share your memories.