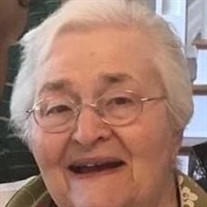 FLORENCE RABITZ LANDAU SIMON (“Fay”) passed away peacefully on October 27, 2021. She was born May 3, 1926, the daughter of Abraham and Pauline Rabitz. She was preceded in death by two husbands she adored, Jack Landau and Abe Simon, and by her beloved siblings Fran Brauner and Joe Rabitz. She is survived by 4 children and their spouses: Gary & Judy Simon, Kathy & Ron Lieberman, Michael Landau & Brenda Seiton, and Ed & Laurie Simon Goldman. Fay was grandmother to twelve: Jill Marcus, David Lieberman, Steven Lieberman, Ian Simon, Jay Simon, Andy Simon, Lea Schweitzer, Zack Goldman, Josh Simon Goldman, Hannah Simon Goldman, Ellie Simon Goldman, and Jack Landau. She had 15 great-grandchildren. A widely extended family of many nieces and nephews were also very close to her heart. Fay grew up in Bridgeport, CT and graduated from Smith College. Following her graduation in 1947, she moved to Wilkes-Barre, PA to accept a job, and remained in Wilkes-Barre until her move to Cincinnati in 2004 with Abe. During her years in PA she generously volunteered her time and skills to many, many organizations in the community. Her volunteer work coordinating programming for Senior Adults at the Jewish Community Center grew into a part-time job; eventually as the program grew and flourished, it became a full-time position as Senior Adult Director. She was proud of the ever-expanding menu of opportunities she provided to her “seniors,” and hundreds and hundreds of people were touched by her work. She was closely connected to her synagogue, where she was involved in its Sisterhood and loved singing in the choir. To remain careful in the time of Covid, private funeral services will be held in-person for the immediate family only. Extended family and friends are warmly invited to connect to the service through streaming https://webcast.funeralvue.com/events/viewer/62841 . The service will be held on Sunday, October 31 at 1:00 pm. Shiva will be held through Zoom, Monday, 7:00 P.M. Join Zoom Meeting https://us02web.zoom.us/j/85017189539 To those interested in making memorial donations, Fay’s family suggests contributions to Songs by Heart (connecting people with memory loss to the joy of music) http://www.songsbyheart.org/donate/ or Temple Israel in Wilkes-Barre, PA https://www.templewb.org/give/general-tribute-donations/

FLORENCE RABITZ LANDAU SIMON (&#8220;Fay&#8221;) passed away peacefully on October 27, 2021. She was born May 3, 1926, the daughter of Abraham and Pauline Rabitz. She was preceded in death by two husbands she adored, Jack Landau and Abe Simon,... View Obituary & Service Information

The family of Florence "Fay" Simon created this Life Tributes page to make it easy to share your memories.