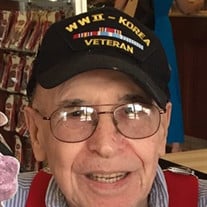 Elliott Sanford Rose, 1925-2017 Elliott Rose fought for the U.S. in two international wars between his 17th and 28th birthdays -- and then lived another six decades forever molded by his service. He died at age 91 on Jan. 9, 2017, in Mason, OH, with family members at his bedside. Born on Nov. 15, 1925, to Beatrice Feinberg and Michael Rose of Brooklyn, NY, Elliott was raised by his hard-working mother and a network of his relatives. After graduating in 1943 from DeWitt Clinton High School in New York, he immediately enlisted in the Army. He was assigned to the Engineer Combat Division, and his WWII missions included clearing mines, maintaining and building roads and erecting pre-fab bridges. He served in the infantry during the famous Battle of the Bulge and the capturing of the Bridge at Remagen. Between WWII and the Korean War, Elliott graduated from the University of Southern California’s School of Commerce and worked as a civilian assistant to a movie producer in Hollywood. He joined the Air Force during the run-up to the Korean War, becoming a commissioned officer and serving as press advisor for the United Nations treaty-negotiating team. In 1955 he married Norma Adele Feinn of Waterbury, CT, who survives him after 61 years of marriage. They had met in the 8th grade in Waterbury and reconnected after the Korean War. Together they raised three daughters: Diane Rose Deitel (Bob) of Louisville, KY; Amy Rose Immerman (Alan) of Cincinnati; and Robin Rose (Carl Sturgeon) of Brussels, Belgium. They have five grandchildren: Rebecca Resnick, Rachel Resnick and Joshua Deitel, all of New York City, Allie Deitel of Seattle, and Ryan Sturgeon of Columbus, OH; and one great-grandchild: Jackson Sturgeon, of Columbus. After his military service, Elliott was a public relations specialist, home developer, sales manager, pioneer in the recycling business 40-plus years ago, eventually taught college small-business classes and also ran testing for the US armed services. His career played out in Connecticut, Michigan and Ohio -- including nearly 40 years in Lima, OH. Always, Elliott and Norma enjoyed a busy lifestyle, riding bicycles, playing tennis, golf, bridge and other card games, reading, enjoying live and recorded music, and sometimes acting in stage productions at Lima’s Encore Theatre, where Norma was office manager. Elliott was active in civic and war veterans’ groups, too. And he had a special fondness -- and became known citywide in Lima -- for writing letters to the local newspaper. Graveside services Wednesday, January 11, 1:30 P.M. at United Jewish Cemetery, 7885 Ivygate Lane, Montgomery, Ohio 45242. A Minyan service will be held Sunday, January 11, 12:30 P.M. at Cedar Village, with visiting beginning at 11:30 A.M. In lieu of flowers, memorial contributions may be made to Cedar Village Care & Community, 5467 Cedar Village Drive, Mason, OH 45040 or Temple Beth Israel-Shaare Zedek, 2105 Lakewood Avenue, Lima, Ohio 45805.

Elliott Sanford Rose, 1925-2017 Elliott Rose fought for the U.S. in two international wars between his 17th and 28th birthdays -- and then lived another six decades forever molded by his service. He died at age 91 on Jan. 9, 2017, in Mason,... View Obituary & Service Information

The family of Elliott Sanford Rose created this Life Tributes page to make it easy to share your memories.