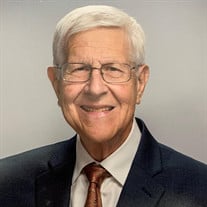 Dr. Paul D. Stein, 87 died Thursday, July 15, 2021 in Boynton Beach, Florida after a short battle with renal failure. Paul leaves behind his wife, Janet; sons, Simon (Tracy) and Douglas and his daughter, Becky. He also leaves behind his grandchildren, Evan and Audrey. He is remembered fondly as “Uncle Pinky” by loving niece, Lisa Rosen (Gary); nephew, Steven Stein (Judy); nephew John Stein (Jennifer); niece, Elena Stein, great nephews, great nieces and sister-in-law, Polly. He was preceded in death by his older brother, Jacob. Born in Cincinnati, Ohio, April 13, 1934, where his father, Simon, was a dry goods merchant, he was raised by his mother, Sadie and his devoted Aunt Helen. Paul was always social and popular beginning with his days at Walnut Hills High School. He went on to study physics and mathematics at the University of Cincinnati. Dr. Stein served as an officer in the United States Air Force (retired with rank of Captain), applying his expertise in physics to the development of air-to-air munitions, including the sidewinder missile which is still being used to this day. His experience in military engineering, lead to his interest in medical education and career in cardiovascular research. He graduated in 1959 with his MD from the University of Cincinnati. Dr. Stein met his wife, Janet, while in residency at Jewish Hospital in Cincinnati and they married August 14, 1966. After residency, he conducted a fellowship in Boston, where he continued his study of pulmonary circulation which led to monumental studies in pulmonary embolism, pulmonary hypertension and valvular heart disease. His career eventually took him to Detroit, Michigan where he directed research of a cardiovascular catheter laboratory at Henry Ford Hospital. Dr. Stein was the world’s expert on pulmonary embolism. He served the American College of Chest Physicians as its President in 1992-1993 and in 2004 was recognized as a Master Fellow in that organization which is only awarded to those considered to be the most accomplished in the field of chest medicine. He published, as a single author, 3 additions of Pulmonary Embolism, and has written contributions to a recent edition of Grey’s Anatomy. Dr. Stein spent his last years at Michigan State University, as a Professor for the Department of Osteopathic Medical Specialties and he continued his research while residing in Florida. His contributions to medicine include hundreds of published articles, 5 books, and countless lectures that have given the world its current understanding of heart and pulmonary diseases. He loved that his work allowed him to travel the world meeting interesting colleagues and was the proud recipient of many awards and accolades for his extensive work in cardiology. When he was not researching and writing, he enjoyed time playing his clarinet, socializing with friends, spoiling his dog, and sharing the company of his wife, Janet. A family graveside service is planned in Cincinnati, Ohio. In lieu of flowers, donations can be made to the American College of Chest Physicians foundation, https://foundation.chestnet.org/ways-to-give/ or American Society for the Prevention of Cruelty to Animals, https://www.aspca.org/

The family of Dr. Paul D. Stein created this Life Tributes page to make it easy to share your memories.