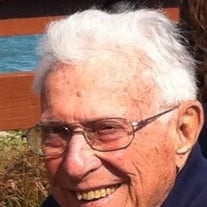 Donald Lee Dahlman born July 24th 1918 in Cincinnati, Ohio to Benjamin and Gertrude Dahlman, the baby brother of Adele, passed away in Cleveland, Ohio at Menorah Park surrounded by his family. A graduate of Walnut Hills High School and the University of Cincinnati, he dutifully answered the call of his country when deployed to London, England during World War II. While figuring the finances of American troops, his heart was captured by an English girl and his soulmate Phyllis “Babs” Dahlman, who unbeknownst to him, was working for Special Operations Executive. Wed in London during tumultuous times just before D-Day, Babs and Don's unparalleled partnership and love affair lasted for over 67 years. In the years following VE Day, Don returned with his war bride to his beloved Cincinnati and used his keen intellect and flair for sales in a brand new business called Television. Hearing a radio show reporter and interviewer in Dayton, Ohio, Don was struck with an idea that would change the course of television. On November 6th, 1967 the television talk show, that would become the template for all others, aired for the first time on WLWD. On live TV with the at home audience able to call in, Phil Donahue interviewed an atheist, Madalyn Murray O’Hair, in Dayton, Ohio. Callers heatedly dialed in during that hour of television and jammed the Southwestern Ohio telephone system. This was The Hour that all involved knew that they had something very special. Don took this local television talk show to every market in the country and one by one sold The Phil Donahue Show through its syndication in 1970. He had a very exciting career as a television executive, traveled the world extensively with his bride, and was very proud of his family. Don loved Babs, his family, hard work, and tennis. He was a wonderful father, grandfather, and friend. He is survived by his three children: Teresa Ruch (Edward) of Cleveland, Ohio; Patricia Dahlman (Michael DalCerro) of Lyndhurst, New Jersey; Martin Dahlman (Jennifer) of Pataskala, Ohio; his grandchildren: Christopher Ruch of Cleveland, Ohio; Leslie Ruch of Cleveland, Ohio; Paul Ruch (Melissa) of Cincinnati, Ohio; Leah Ruch (Adam Slutzker) of Denver, Colorado; Joey Edwards of Cincinnati, Ohio; his three great-grandchildren: Caden & Parker Ruch and Noa Slutzker; as well as nephews and nieces from Chicago and Florida to England and France. The family would like to thank the exceptional staff of the Friedman Pavilion at Menorah Park for taking extraordinary care of our dearest loved one in the last years and days of his life. A Celebration of Don’s Life will begin with family visitation Monday 6- 8 PM at Weil Funeral Home, 8350 Cornell Rd, Cincinnati, OH; Service & interment will be Tuesday at 11:00 AM at the same location; a luncheon for family and friends of Don to follow at a separate location. Donations can be made to Menorah Park in Beachwood, Ohio.

Donald Lee Dahlman born July 24th 1918 in Cincinnati, Ohio to Benjamin and Gertrude Dahlman, the baby brother of Adele, passed away in Cleveland, Ohio at Menorah Park surrounded by his family. A graduate of Walnut Hills High School and the... View Obituary & Service Information

The family of Donald Dahlman created this Life Tributes page to make it easy to share your memories.