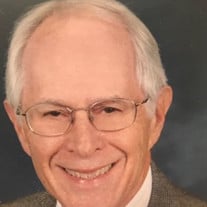 David Reichert passed away February 18, 2019. An attorney and retired partner with Porter Wright Morris & Arthur LLP, practicing in the area of general business, law, trade association and estate planning, he was born in Cincinnati on November 23, 1929, the son of Rabbi Victor Emanuel and Louise Reichert. Married for 59 years to Marilyn (Frankel), he leaves three sons: James (Mount Kisco, NY); Steven (Tenafly, NJ) and William (Dubai, UAE), and seven grandchildren: Sydney; Shane (Boston, MA); Alec (Madrid, Spain); Samuel and Harrison (Tenafly, NJ); David and Cecilia (Austin, TX). He was deeply devoted to his wife Marilyn and family and was a lifelong aficionado of reading, the arts, music, golf, fitness, travel, and an ardent fan of Cincinnati sports teams. David was active in civic and charitable matters, having served as past President of Rockdale Temple, past President of the Contemporary Art Center, past President of The Literary Club, and past President of Losantiville Country Club. For years he was on the Board of Trustees of the Art Museum and was of counsel to that institution and Cincinnati Opera. He served on the Amberley Village Planning Commission and its Zoning Board of Appeals. He was a graduate of Walnut Hills High School, Bowling Green State University (L.L.B. 1951) and the University of Cincinnati College of Law (J.D. 1954), where he was on the board of Editors of the Law Review. He served in the US Army from 1954 to 1956. David was admitted to the Ohio State Bar in 1954 and was admitted to The United States Supreme Court, The United States Court of Appeals for the Sixth Circuit, The United States Court of Appeals for the Seventh Circuit, The United States District Court for the Southern District of Ohio and The United States District Court for the Eastern District of Kentucky. Prior to joining Porter Wright, he was a Senior Partner in Reichert, Strauss and Reed and prior to that was a Partner in Gould, Reichert and Strauss, both Cincinnati law firms. During his legal career he was a champion of recycling and won landmark decisions on behalf of the scrap metal recycling industry. He was instrumental in bringing new legal protections to his clients and removing harmful legal prejudices once faced by the scrap metal industry. His work on behalf of his clients and the scrap metal industry helped establish scrap metal businesses as respected members of communities that are responsible for creating countless jobs and recycling, literally, tons of scrap metal each year. He was a consummate gentleman, never failing to respond to meeting notices, calls, or invitations. He even sent thank-you notes for birthday and holiday cards. An opera buff, his personal “reviews” of both the Met and Cincinnati Opera performances were always musically astute, knowledgeable, and entertaining. Memorial contributions can be made to Rockdale Temple Sacred Music Fund in honor of David & Marilyn Reichert, 8501 Ridge Rd., Cinti, OH 45236

David Reichert passed away February 18, 2019. An attorney and retired partner with Porter Wright Morris & Arthur LLP, practicing in the area of general business, law, trade association and estate planning, he was born in Cincinnati on November... View Obituary & Service Information

The family of David Reichert created this Life Tributes page to make it easy to share your memories.