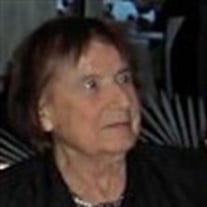 PHILLIPS, Claire Philanthropist, Business Woman, Pilot, Wife, Mother, Grandmother and Great Grandmother…are just a few words used to describe Claire Phillips, who passed away in her home Saturday, March 5, 2016 just shy of her 91st birthday. Claire, and her husband Charles, started the Phillips Supply Company in 1947. Claire shortly after, became a Pilot for Phillips Supply, flying around the country to their various businesses as well as for pleasure. She flew out of Stevens Aviation at Lunken Airport and was the first female member of the “Million Miler Club”. Claire loved playing golf, and was an avid traveler. Claire and Charles loved going on unique trips like; Safari in Africa, as dignitaries in China and on her own to the Galapagos islands. Claire’s generosity was endless, developing long lasting relationships while donating to organizations like; Good Samaritan Hospital Foundation, Bethesda Foundation, The Jewish Hospital Auxilary, The Cincinnati Zoo, Mt. St. Joe University, Crayons to Computers and Light House Youth Services…just to name a few. Claire was preceded in death by her husband Charles A. Phillips, and is survived by her daughters Peggy (Bruce) Greenberg and Pam (Courtney) Rossmann, her granddaughters Paige (Steve) Castellini and Patti (Kurt) Rothfuss and her great grandchildren, Charlie, Phoebe and Piper. Services were held Monday, March 7 at Weil Funeral Home. In lieu of flowers, donations can be made to any of the listed Charities above in Claire’s name.

The family of Claire B. Phillips created this Life Tributes page to make it easy to share your memories.