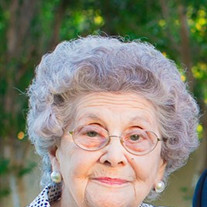 Bessie Lang, (Bubby), beloved wife, mother, grandmother, great grandmother, sister and aunt, passed away peacefully surrounded by family on August 9, 2016 at the age of 98. Born Bessie Wolf in 1918 in Cincinnati to Label and Tema Wolf, she was the eldest daughter of four siblings. She graduated from Hughes High School. She met her future husband, Albert, when her sister, Edith, introduced them at a military dance at the JCC. They were married on June 4, 1944. Mom worked alongside our Dad in the family fish and poultry business, Al’s Fish Market on Burnet Avenue. Later Mom and Dad had a spot at the local Flea Market. Mom’s family always came first. Nothing was more important. Her heart was always filled with unconditional love for her children and their families. She participated in every possible aspect of their lives and kept a diary for over sixty years dedicated to the goings on of her family. She was with them when they had their children, traveled with them, and celebrated each of their milestones. Bessie belonged to the JCC Troubadours, a senior singing group that entertained at retirement homes and convalescent hospitals. She had many varied interests and hobbies; she loved to read. Bess was preceded in death by her husband in 1978 after 34 years of marriage. She is survived by her five children, Andy Lang (Mary), Emily Ness (John), Barbara Matacia, Sharon Hoicowitz, and Murray Lang (Jeanne); nine grandchildren, Jen Schutte (Joe), Jonathan Ness (Hallie), Martin Lang, Brandon Lang (Shannon), Tova Hoicowitz (Julia), Abby Hoicowitz, Jessica Osborn (Miles), Erika Arriaga (Carlos) and Bianca Lang and eight great-grandchildren; Bridget, Cameron, Ryan, Abby, Ethan, Jack, Henry, and Carlos, Jr. plus numerous nieces and nephews. She was also preceded in death by her brothers, Harry and Melvin, and sister, Edith Lehrner. Services at Weil Funeral Home, 8350 Cornell Rd,Friday,August 12th, 11 AM. Memorial contributions to Senior Center at the Mayerson Jewish Community Center would be appreciated.

Bessie Lang, (Bubby), beloved wife, mother, grandmother, great grandmother, sister and aunt, passed away peacefully surrounded by family on August 9, 2016 at the age of 98. Born Bessie Wolf in 1918 in Cincinnati to Label and Tema Wolf, she... View Obituary & Service Information

The family of Bessie Lang created this Life Tributes page to make it easy to share your memories.