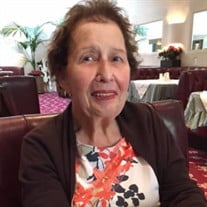 Bernice “Neecy” Grusd Mark passed away peacefully in her sleep on June 21. She was 90. She was born in Cincinnati on September 9, 1930. After graduating from Walnut Hills High School, she married Jay Jerome “Jerry” Mark and began a 72-year-long marriage in which they raised a family together: their three sons, Stanley (Paula Prewett) of Savannah, Ga., Marvin of Phoenix and Larry of West Hollywood, CA, and daughter Debbi, who died in 2016. Bernice was preceded in death by Jerry, who passed away in March, and also by her brother Edwin Grusd and sister Elizabeth Becker. She and Jerry were nearly inseparable during most of their decades, together, particularly during the 1960s, 1970s and 1980s when she worked with him in two different drugstores they ran together: Jerry Mark’s Pharmacy in Finneytown and later Lahrmann Pharmacy in Clifton near the University of Cincinnati campus. At both stores, customers came to know, and for the most part, appreciate her conversational style, her wit and willingness to share her political views (her children learned a whole new kind of vocabulary during the Nixon/Watergate years, much to Jerry’s chagrin – he was not thrilled with her outspokenness in a conservative leaning neighborhood). The drug store was a fixture in the Brentwood section of Finneytown and she was a recognizable figure to many in the community, including as she’d fondly recall, a group of Cub Scouts touring the Springfield Township Police Department one morning as she as being fingerprinted as part of an investigation of a break-in at the store. “Isn’t that Mrs. Mark from the drug store?” one Scout pointed and shouted across the station. In later years, she sold real estate for a few years and worked for a friend’s travel agency. But, like the family she married into, it was the drug store business that attracted her – from doing the bookkeeping but especially interacting with the customers. Her outspokenness was a perfect complement to Jerry’s more reserved nature. She was the original multitasker in the days of raising her children, in addition to working at the drug store, she juggled car shift ride schedules for religious school on weekdays and Sundays, shuttling kids to practices and games and summer day camps. Her limited available time for socializing seemed to be concentrated on keeping in close touch with friends and especially with family on telephone calls (long before the days of cell phones and texts) – and particularly with her sister “Libs.’ During the early years, there was little time or the financial resources to travel much but she and Jerry thoroughly enjoyed traveling in later years to visit their kids in Seattle, New York, Los Angeles, Phoenix Miami and elsewhere. One of her most memorable trips during this time was a weeklong visit to London in 2004, where her mother, Fannie Rifkind Grusd, had been born. When Bernice wasn’t traveling, she was watching cable news and keeping up with politics and current events, watching most every Reds or UC Bearcat game (especially basketball) with Jerry, and doing crossword puzzles from the Cincinnati Enquirer or the New York Times. She was a voracious reader, especially of mysteries and psychological thrillers with an occasional Danielle Steel or romance novel thrown in for good measure. In addition to her three sons, Bernice is survived by two grandsons, Dan and Stephen of Austin and Tucson respectively, and two granddaughters, Madeleine and Emily, both of Brooklyn; her sister-in-law and brother-in-law Pat and Darryl Blitzer, sister-in-law Rita Grusd and brother-in-law Albert Becker, all of Cincinnati. Private graveside services will be held in Cincinnati later this week. In lieu of flowers, donations are encouraged to Adath Israel Congregation (adath-israel.org), Fair Fight (fairfight.com) or a charity of your choice. Meeting Recording: https://us02web.zoom.us/rec/share/ERAamZDxtrw0zwFkVPo_Puf5z4mLCZcz-NUWHY0V2iEk11quvi7xnuNEjx0Jo61c.6TMCs5GQaqyt0Umf

The family of Bernice Mark created this Life Tributes page to make it easy to share your memories.

Bernice “Neecy” Grusd Mark passed away peacefully in her sleep...