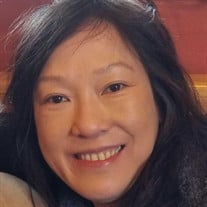 Andi Zing began her amazing life in Hong Kong in 1968. In 1981 she arrived in the United States with a backpack, one small suitcase, and a very limited English vocabulary. She and her family made their way to Portland, Maine and opened what would become the best Chinese restaurant in the state. She met her husband at age 15 while working at the restaurant; they later started dating and remained together throughout her life. Andi had a gift that allowed her to become fluent in English quickly and speak it without an accent. She also spoke Cantonese as a native, another gift she used to converse with other Cantonese speakers all over the world. She attended Waynflete Academy in Portland Maine, started college at Simmons in Boston, then finished her degree studies at Southern Maine Community College in human nutrition, which she would later put to good use. In 1993 she moved to Avon, Colorado and married her soul mate and lifelong love, Delling. Andi and Delling traveled extensively throughout the Southwest and West over the next 25 years, taking in and appreciating all of nature’s bounty. Andi worked various jobs in Colorado, and quickly moved up to managing several large retail businesses. In 2004 she put her nutrition degree to work when she and Delling opened Colorado’s very first all-organic restaurant inside the specialty food store they owned, called Freshies. Her great passion for health inspired visitors from all over the world to eat seasonally-fresh foods grown without pesticides and chemicals. Many of her customers became friends that would stop by for her food and ideas on nutrition and life. In 2008 Andi, with Delling’s help, produced her next miracle, Zohar. Several years later, after deciding not to have any more children, Andi announced, “I want Zohar to have a mate for life.” In 2012, at age 44, Andi and Delling created another miracle, named Zara. Andi’s role as mother instantly became the most important and rewarding endeavor of her life. The bounty of her love and joy increased every day as she embraced motherhood and the care of her “three” children. She often referred to her body as a “suit” that we wear for our soul’s short journey on Earth. She knew her spiritual self would live on after her passing. She would like everyone to take a moment to fill their hearts with love and joy. She would also like everyone to remember that one kind word can change the world. Andrea is survived by her husband, Delling; her sisters, JoAnn and Bernice; her brothers, Chun, Henry, and Ken; and her children, Zohar and Zara. Burial at United Jewish Cemeteries in Montgomery, Ohio. Donations in her memory may be made to The Non-GMO Project or to Chabad of Vail, Colorado.

Andi Zing began her amazing life in Hong Kong in 1968. In 1981 she arrived in the United States with a backpack, one small suitcase, and a very limited English vocabulary. She and her family made their way to Portland, Maine and opened what... View Obituary & Service Information

The family of Andrea Zing created this Life Tributes page to make it easy to share your memories.