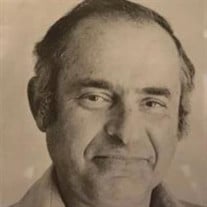 Aaron Rubinstein, 93, Holocaust survivor, peacefully took his last breath at 11:55 am on Tuesday, July 20th with his family surrounding him in love. Aaron began his life in Sokolov Podlaski, Poland on February 28, 1928. He was the youngest son of Benyamin and Hiah (Tyk) Rubinstein and the youngest of five children. His and his family's whole world was uprooted in 1939 with the invasion of Germany. Aaron's parents, his siblings, Rivke, Shlomo, Yosef, and Lea escaped to Siberia via cattle cars. In Siberia, life was exceedingly difficult, and Aaron was taken to an orphanage by his sister Rivke so he could have food to eat. The Polish government, the Jewish Agency, and the American Red Cross worked together to take these orphans to Tehran. Aaron's family was not aware of these plans, and his sister, Rivke, came to visit him one day to find that the orphans had started their migration to Persia via Karachi, Uzbekistan, India, and the Sinai Desert. The Tehran Children arrived in August 1943 where they lived in tents and Aaron contracted malaria. After eight months, Aaron was able to immigrate to Palestine, specifically Ein Harod, a kibbutz where he had a room with two other boys. Aaron worked in the fields and was able to catch up the years of schooling that he missed. Aaron joined the Israeli Army in 1946 and fought for the country's independence in 1948. In 1949, while driving for the army, his vehicle ran over a mine, and he was injured. Rehabilitation involved working on jewelry to regain his fine motor skills. He always loved art and jewelry and sculpture fed his passion. Aaron met Rachel while she was in the Israeli army and both felt education was a priority. Aaron went to college to study Bible at Hebrew University, and the Teacher's College, and later an Administrative Degree. Rachel also went to the Teacher's College and they started their teaching careers in Ashkelon, Israel. Aaron became the principal of a school and together they taught thousands of immigrant children. Aaron and Rachel were always looking for adventure together and better opportunities and became exchange teachers with the United States. In 1960, with Hillel, their son, arrived in Chicago for a one-year teacher contract. Aaron took the opportunity to study art and sculpture at the Chicago Art Institute which he loved. They returned to Israel where Haguit, their daughter was born and in 1964 received a visa to return to the US. This time to Minneapolis where Aaron, 1965, received another master's degree at the Minneapolis Art Institute majoring in sculpture and minoring in metalsmithing. They returned to Israel in 1966. The Rubinstein Family finally settled in Cincinnati in 1968, where Aaron and Rachel taught at Yavneh Day School. Aaron wanted a new challenge and started the art jewelry company, Modern Art Jewelry. Rachel and Aaron worked side by side building Modern Art Jewelry where Aaron designed, cast, and fabrications beautiful works of modernist and contemporary sculptural jewelry. They traveled throughout the country selling to galleries, museums, and gift shops. Aaron's designs won national awards. Aaron was preceded in death by his beloved wife, Rachel (Zwikelski), his parents, Benyamin and Hiah, his siblings, Rivke Steiner, Shlomo and Yosef Rubinstein, and Lea Raifman. Aaron is survived by his son, Hillel (Ellen), his daughter, Haguit Rubinstein-Towler (Vance Towler), his grandchildren, Jennifer Rubinstein Pelzer (Jason), Sara Rubinstein Harrison (Garrett), Jared, Danielle, and Jordan Rubinstein-Towler, and Great-grandchildren, Victoria and Jacob Pelzer, and Colton and Calla Harrison, and loving companion, Esther Goldstein. Funeral services will be held at 1:30 PM on Wednesday, July 21 at Weil Kahn Funeral Home, 8350 Cornell Road, Cincinnati, Ohio 45249, the family will begin receiving at 12:30 PM. If you are unable to join in person, please join virtually via Zoom: https://us02web.zoom.us/j/88424030490?wd=S1gvS3hXdW9NNHBjRWs3UjRPZ1hiZz09 Meeting ID: 884 2403 0490 Passcode: 924349 Shiva will be observed at Etz Chaim, Wednesday and Thursday, 7:00 PM, 8100 Cornell Road, Cincinnati, Ohio 45249. In lieu of flowers, donations to Etz Chaim would be appreciated.

Aaron Rubinstein, 93, Holocaust survivor, peacefully took his last breath at 11:55 am on Tuesday, July 20th with his family surrounding him in love. Aaron began his life in Sokolov Podlaski, Poland on February 28, 1928. He was the youngest... View Obituary & Service Information

The family of Aaron Rubinstein created this Life Tributes page to make it easy to share your memories.